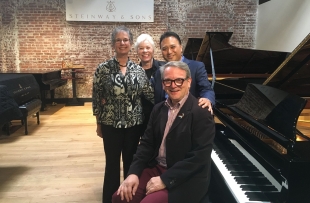 A new Steinway concert grand piano officially made its debut at the Bankhead Theater on Dec. 7 when Livermore-Amador Symphony performed its "Winter Dreams" concert, which included the "Carnival of the Animals" by Camille Saint-Saëns. This piece includes two pianos in the full orchestral score, and the new Steinway was one of the two grand pianos used.

Internationally acclaimed pianist Jon Nakamatsu, who has performed at the Bankhead Theater multiple times, assisted in the selection of the new piano. He played several pieces on each of five possible instruments, which were judged on sound and performance quality, and the Steinway Concert Grand Model D was selected.

The Bankhead hosts dozens of performances each year requiring the use of a piano from classical to rock, jazz and other musical genres. Given the high level of use and replacement cost, rather than purchase the new piano outright, its lease agreement allows for replacement with a new instrument in seven years.

The new piano replaces an earlier Steinway model that was purchased by Jean King as a donation to the newly opened Bankhead Theater in 2007. The list price for the new piano is $176,300, but the old piano was traded in and a price for a seven-year lease was negotiated.

Initial funding for the new Steinway came from donors Linda Tinney and Ron and Jo Ann Koopman, which allowed the piano to be delivered in time for the concert. A Bankhead Piano Fund has now been created to raise money to cover the ongoing costs of the piano lease, tuning and maintenance.

For more information on the fund or to make a donation, contact Steve Glavan at 583-2304 or sglaven@lvpac.org.

The Impact of COVID-19 on Our High School Juniors and Seniors
By Elizabeth LaScala | 0 comments | 2,897 views

The first few seconds after awakening; before I remember the virus
By Chandrama Anderson | 0 comments | 2,485 views