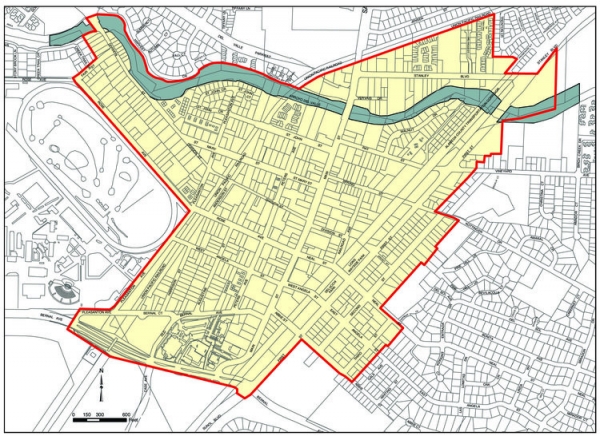 Joe Barone wants everyone to know that he has no plan to close his popular restaurant at 475 St John St. in downtown Pleasanton to build more housing on the largely residential street, at least not now.

Even so, he and his wife Maricela have asked a task force charged with recommending a new “vibrancy plan” for downtown Pleasanton to consider including the land they own on the street for a zoning change that would allow single family homes. Their bid, along with a similar request by the owners of the Shell gasoline station at the corner of First Street and Vineyard Avenue, were both approved by the task force at its meeting on Feb. 25.

Those actions, made without public notice, will likely dominate the discussion by the Pleasanton City Council Tuesday night as it weighs in on the current status of the task force’s 2-1/2-year effort to develop a new plan for the downtown district. (See map above.)

Critics of the task force’s recommended changes for downtown, which now include allowing condos and apartments up to three-stories tall to be built behind 50-foot-deep retail stores on Main Street, argue that rezoning requests such as these should first go to the city planning staff and be decided by the Planning Commission, not a task force. No notices were sent out about these possible zoning changes, as required by the city.

The Barones also criticized a story posted by the Pleasanton Weekly after the Feb. 25 task force meeting that stated that they told the task force of their plans “to eventually tear down” their restaurant sometime after the property is rezoned residential.

“That story had impact,” Maricela Barone said. “By saying that in the Weekly, we now have people coming in and saying how sorry they are that we’re closing.”

“Who knows?” she added. “That might be a year from now, it might be 10 years from now. We just want to keep our options open if and when we retire.”

She and her husband said the Weekly should have contacted them for clarification, not just reported on what occurred at the task force’s public hearing.

Gerry Beaudin, the city’s community development director, said the council on Tuesday will review these and other task force revisions made suddenly at its Feb. 25 meeting.

“Those changes have caused quite a bit of conversation in the community,” he said. “That’s not where we are right now. The council will be looking at whether it’s appropriate to make the land use changes in the new downtown plan.”

He added: “The Barones and the Shell station owners are trying to get their properties included in changes being made to the task force plan, so it will be the City Council’s call ultimately about what happens to those properties. They’re not now in the task force documents.”

The task force will convene again for a final time in a public forum on April 23 and will likely follow the directions it gets at Tuesday’s council meeting before making a final recommendation.

Among other new recommendations being made by the task force would be to allow ground-floor residential residential units downtown. Three-and-four story apartments and condos could be built behind storefront retail shops. These would be similar to the higher-density three-story building now nearing completion on Spring Street, just off Main, which also has ground floor retail spaces.

In a letter sent to Mayor Jerry Thorne and other members of the City Council, Planning Commissioner Nancy Allen questioned the new direction of the Downton Specific Plan task force.

She wrote: “I was excited about the direction of the DSP task force prior to the Feb. 25 meeting. I thought many of the recommendations would help create a more vibrant retail center for our residents. However, I was concerned with the sudden reversal of DSP recommendations at that meeting.

“If left to stand, I believe these recommendations will reduce our retail vibrancy and turn our existing Main Street and connecting side streets into more of a dense residential area vs. a vibrant and unique retail-oriented downtown that excites our residents. I think there are unintended consequences that have not yet been fully explored. Hopefully I am wrong.”

Thank you so much for this. I was into this issue and tired to tinker https://kodi.software/ around to check if its possible but couldnt get it done. Now that i have seen the way you did it, thanks guys
with
regards


Commonly we attain confused when we finally hear the exact terms website development service in addition to internet developer getting used interchangeably. But thoughts is broken done looking over this, all your individual confusions may perhaps disappear. Poof!
https://shell-shockers.online