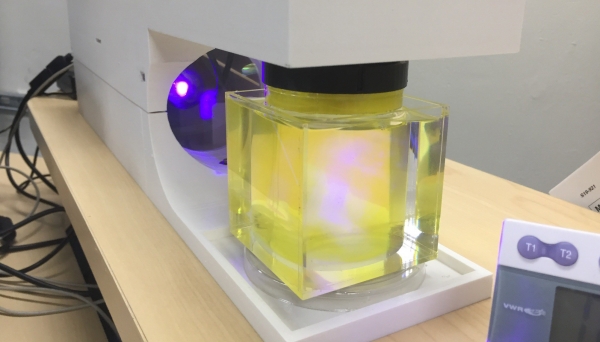 “It looks like something you might find aboard the Starship Enterprise,” said Jeremy Thomas, a spokesman for Lawrence Livermore National Laboratory (LLNL).

He was talking about a projector that can beam a three-dimensional video into a container of photosensitive resin (pictured, photo by Hossein Heidari, UC Berkeley). The container then rotates for a few minutes, lets the fluids drain and then leaves behind a complete, fully formed 3D object.

“Though it seems like science fiction, it’s not, thanks to scientists and engineers at LLNL and UC Berkeley, who have developed a brand-new high-speed 3D printing method called Computed Axial Lithography (CAL),” Thomas said in an announcement about the procedure.

The method is described a paper printed in the journal “Science,” published online Jan. 31.

“This is a breakthrough in the space of possible methods to do additive manufacturing,” said LLNL engineer Maxim Shusteff, a co-author on the paper.

“What this approach does is make it possible for interesting polymer parts to be made much more quickly, which is often a bottleneck, and we can now think about using materials that don’t work well with slower layer-by-layer methods.”

Thomas said that LLNL and UC Berkeley have filed a joint patent on the technology, which builds on and leaps beyond the pioneering work on multibeam manufacturing, or VAM.

CAL creates entire parts at once, using projected photons to illuminate a syrup-like resin, creating a continuously shifting video of projections as the vial rotates. Like a CT scan done in reverse, the projections combine to form a 3D object that is suspended in the resin.

“This method is more powerful than other VAM concepts because it can create more complex structures in a layer-less fashion while using standard projection technology,” said Chris Spadaccini, director of LLNL’s Center for Engineered Materials and Manufacturing and co-author of the paper. “It’s layer-less, it produces parts with good surface roughness, it is fast, and we believe it to be scalable to much larger sizes.”

By using a projector instead of multiple laser beams, which required scientists to account for and adjust each beam, the researchers demonstrated they could shine 1,440 different projections (four beams per degree in 3D space) into the resin as it rotates. This makes the process easier to control than other laser-based volumetric methods, researchers said, and allows for much broader geometric flexibility, such as easily creating curves and smooth surfaces.

According to researchers, Thomas said, CAL is also cheaper than the multibeam volumetric approach because it employs a standard commercial projector and off-the-shelf chemicals. The flexibility, broad range of materials and ease of use make CAL a promising technology for industry, where scientists see potential applications in national security, space, optics, aerospace, life science, medicine, dentistry, automotive and consumer durable goods.

For their first test, the Berkeley group successfully printed a 2D model of the Cal logo, and followed that with simple 3D models of atoms and spheres. Subsequent test parts printed at Berkeley and Livermore included a small airplane model, lattice structures, a disconnected sphere inside of a cage, a lens and a miniaturized version of Rodin’s famous sculpture “The Thinker.” The largest object was a model of a human-sized lower jawline, showing that CAL could be capably used to create dental implants.

Kelly explained that one of the parts, a screwdriver, is evidence of CAL’s unique capability of “overprinting”—printing a polymer object over an existing object.

The concept could someday be used in personalized sports equipment, footwear, clothing and hearing aids, according to Kelly. Another part, a bridge structure, showed that researchers could eliminate the need for sacrificial support structures that traditional printing methods require. Many of the parts were generated by UC Berkeley student and the other co-lead author Hossein Heidari.

Heidari said researchers have demonstrated close to zero material waste and 100% reusability of the uncured material, another advantage that comes with support-free 3D printing.

Kelly added that the CAL technique also opens the door to printing with materials like extremely viscous polymer resins that can’t be used with traditional layer-by-layer 3D printing.

“Now, we can take essentially any arbitrary object from a design file and form it as a whole, instead of layer-by-layer,” Kelly said. “It is an entirely new process, and we’ve only scratched the surface of what it can enable. I see this as a new category of additive manufacturing technique that can open up a lot of things. I’m excited to see where we and other researchers go with it.”

The project was funded through the Livermore Lab’s Directed Research and Development program and by UC Berkeley faculty start-up monies. Work will continue to produce structures of much larger volumes, Thomas said.

In an earlier, simple time.
I reacted Monomer with heated nitrogen gas in a fluidized Polymer reactor to produce Polymer.

I mixed the Polymer with phosphoric acid to stabilize the molecule, followed with extruding the mix. sometimes with dye additive to produce medical X-Ray or graphic arts film.

Later in my career, I developed thin films with Polymer resin and several types of emulsions to provide delivery system foe capacitors, chips, diodes and other devices for device manufacturers.

Near the end of my career in the industry, I developed capacitor strategic injection system into extruded resin as it exited the die, the resulting thin film with capacitors is slit into specific dimensions, provided to device manufacturers. The slit thin film with the capacitors is placed in the device.