Pleasanton Hotel’s new restaurants among many new eateries in town 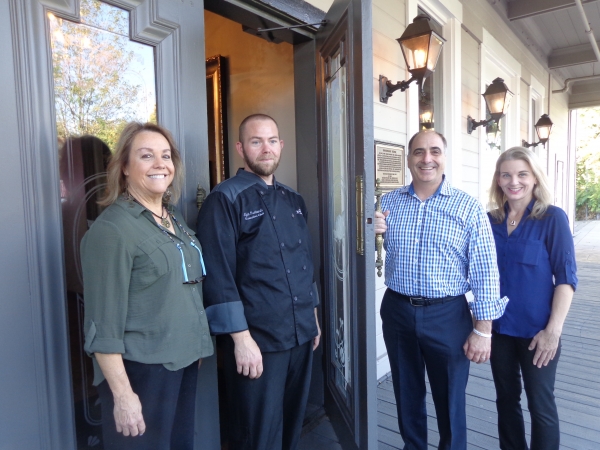 Ed Westmoreland and his team (pictured) are serving hundreds of diners just two weeks after opening the Clubhouse restaurant in the Pleasanton Hotel at 855 Main St., one of several new eateries in the city.

For Westmoreland, who also owns Eddie Papa's restaurant on Hopyard Road, opening a restaurant in the Pleasanton Hotel was “an opportunity for me to be involved on Main Street and to restore the Grand Lady, as the hotel is called.”

The Clubhouse is the first of two restaurants planned for the hotel, along with a refurbished a banquet room and an updated outdoor patio where food and beverages will be served starting next spring.

Work is underway to complete the second restaurant before Thanksgiving. A white tablecloth dining room, it’s been named Lily’s Spirit Room for Lily, the intriguing “friend” who has been haunting the Pleasanton Hotel forever,

“We haven’t seen her,” Westmoreland said, although upstairs office tenants of the hotel have reported unusual nighttime noises and possible sightings.

When fully opened, Lily’s will offer lunch and dinner as well as Sunday brunch.

Westmoreland’s not alone in choosing downtown Pleasanton as a place for surging interest in new restaurants and entertainment centers. Laura Olson, director of the Pleasanton Downtown Association, said more are coming.

Zachary’s Pizza will open early next year in the Bank of America building at 337 Main St., moving into half the current bank space while banking operations will continue in the other half.

Also next year, the Patio Café will take over the former Stacey’s restaurant space at 310-A Main St.

Beso, a higher end Mexican restaurant, will open on the second floor of the new building at 725 Main St.

Also opening next year (hopefully) will be Cook’s Seafood Restaurant in Koll Center, across from the Fairgrounds at the corner of Bernal and Valley avenues. The restaurant has consistently won rave reviews for fresh fish at its Menlo Park location.

“Hopefully” is my expression since a sign on the building since early last year says “Coming Soon.”

Cook’s, on its Website, states: “We know ‘Coming Soon’ sure is taking longer than we all expected. We are working hard to get this right.”

The message continues” “We had some construction delays, but rest assured, we will be opening our award-winning family seafood restaurant soon.”

Since 1928, Cook’s Seafood has been selling fresh crabs and frying up orders of fish and chips on El Camino Real. The Pleasanton restaurant will mark the first time its owners, the Crumrine family, will be expanding outside Menlo Park.

I think it's great that downtown Pleasanton is becoming such a "destination" for people. Another really terrific, relatively new restaurant that the author did not mention is Namaste Pizza located at 239 Main Street, Suite A. They serve Indian Fusion pizza and it is just fantastic. You can eat in, take out, and they deliver, as well.


What a waste of time! Walked in, seated right away, ordered two drinks and to our disappointment we waited 45 minutes for our drinks. They have quite a few waiters but they are running like chickens with their heads cut off, not knowing which way to go. About twelve drinks sitting at the bar waiting to be picked up but no one seemed care. Very disappointed...do not recommend you going there if you are thirsty but if you are willing to wait for almost an hour then by all means go and see for yourself. Speaking for myself, I can go spend my hard earned cash at another watering hole who gives you better service. Wouldn't surprise me if the food is served cold by the time they get it to your table. Lily would not be happy with unsatisfied customers. I saw many people walk out as they too were kept waiting. Hope you have better luck.. Never to return again.

Report Objectionable Content
+  Like this comment
Posted by Fifty Years Here, a resident of Pleasanton Heights,
on Oct 30, 2018 at 6:38 am
Fifty Years Here is a registered user.


I've been there twice since it has re-opened. What a pleasure to go back downtown and know you're going to have a place to park! They've done a beautiful job restoring and celebrating the Hotel as a Pleasanton icon. The Clubhouse is a bar menu and bar atmosphere, and one of my visits was during the World Series. The menu is great. There's a bunch of things I'd like to try in the future. The Fried Pickles and the Red Curry Tacos were both fantastic! Servers were still learning, but were polite and excited to take good care. I'm looking forward to my next visit...