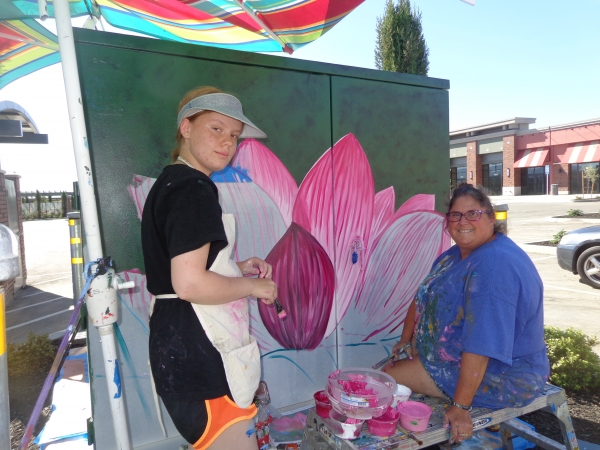 As stores, restaurants and offices prepare to open in Pleasanton’s new Pacific Pearl Shopping Center, college art major Madison Forseth (left in picture) and professional artist and muralist Suzanne Gayle put the finishing touches on utility boxes they are painting throughout the center.

The 112,000-square- foot center on the southwest corner of El Charro and Stoneridge Drive won’t officially open until July, but already its bakery and other eateries are winning rave reviews.

This week, Marketing Director Heath McCue announced the addition of seven new restaurants at the Asian-focused center with the names like MUMU Hot Pot, Basil Delight and Fiery Shanghai wetting the taste buds before their doors even open. Poke Moana and Dalian Club House round out the newcomers’ list.

Sugar Dynasty and Kura Revolving Sushi Bar have already opened, along with 85°C Bakery Café, part of a Taiwanese chain of coffee shops and self-serve bakeries founded in 2003 by tea shop owner Wu Cheng-Hsueh. Among the more than 100 reviews on Yelp is this one about the new Pleasanton shop: “Fresh. Reasonably-priced. Good taste!”

MUMU Hot Pot, a new bar-style hotspot created by the team behind the successful Boiling Hot Pot restaurants in San Francisco and Fremont, will offer a menu of seven signature Chinese soup bases and dipping sauces. Soups contain a variety of East Asian ingredients, and each are prepared at the dining table.

Planned as a home for a growing collection of shopping, dining and service businesses, Pacific Pearl was designed to meet demand from the increasing number of Asian-Americans living in and near the Tri-Valley.

Asian-Americans now make up 30% of the population living within 10 miles of the site, according to the developers. Pleasanton’s demographics have evolved over the past two decades, leading now to a substantial Asian population that is generally well-educated with high incomes.

Yet, only 99 Ranch Market in the Rose Pavilion specifically targets Asian tastes with many imported groceries and meats. It does a booming business with customers coming from throughout the Tri-Valley.

In their survey of where to locate an Asian center, Pacific Pearl developers found that there is a demand here for international dining and shopping experiences. Most of this demand is now met by centers well beyond Pleasanton. They found that there is significant retail and restaurant sales “leakage” that could be captured by the project they are developing.

The center, already 100% leased, is owned by Blake Griggs Properties and managed by Vestar. Its location just off the I-580 exit at El Charro Road and across from the San Francisco Outlets makes it well positioned to serve Dublin and Livermore as well as Pleasanton.

The center’s anchor grocery store – a second 99 Ranch Market in Pleasanton – will offer a higher mix of organic products than most of its competitors. The 15,000-square- foot international public market and food bazaar will be similar to the Republic of Food store in Singapore.

I'm really looking forward to the wide variety of food that will be available in this new Asia focused center.

Report Objectionable Content
+   11 people like this
Posted by Buc Lau, a resident of Another Pleasanton neighborhood,
on Apr 24, 2018 at 10:42 am


I am sure it will be a nice addition. However, I do take some offense as to the emphasis on the center being Asian-focused. How well widely would it be accepted to label something Anglo-focused. We seem to have a double standard. Why can't a shopping center just be a shopping center - why the preference of one demographic over another?


Do you find "Chinatown" and "Japantown" in SF offensive?


Are we doing this find-the-offense thing again? This is an Asian oriented place. Great Asian food. Let's eat. Just wish they had a good Taiwanese street food place.

Report Objectionable Content
+   3 people like this
Posted by Michael Austin, a resident of Pleasanton Meadows,
on Apr 24, 2018 at 7:44 pm
Michael Austin is a registered user.


We visited two weeks ago, just to have a look and check it out.

I lived and worked in Asia for fifteen years. I am looking forward to the hustle and bustle of this new center along with the aroma of all the foods cooking and being served.


@Buc Lau :"I am sure it will be a nice addition. However, I do take some offense as to the emphasis on the center being Asian-focused."

Report Objectionable Content
+   4 people like this
Posted by Karl, a resident of Another Pleasanton neighborhood,
on Apr 26, 2018 at 4:30 pm


Can't even make a positive comment any more without being ridiculed.

Let me re-phrase: I am looking forward to the great variety of globally focused food choices this new center brings to Pleasanton.