Performance will include winners of young musicians competition 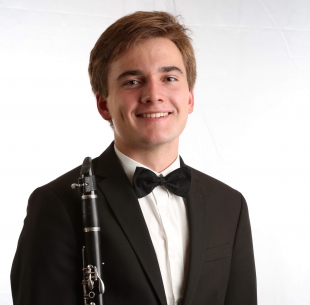 Clarinetist Igor Aprelev, 17, one of two winners of the 2019-20 Competition for Young Musicians, will perform von Weber with the symphony. (Contributed photo)

The concert will feature Franz von Suppé's Overture to "The Beautiful Galatea," Joachim Raff's "Walpurgisnacht" from Symphony No. 8, and César Franck's "Le Chausseur maudit" ("The Accursed Huntsman"), with special performances by clarinetist Igor Aprelev and cellist Starla Breshears, winners of the symphony's 2019-20 Competition for Young Musicians.

Klein is conductor and music director of the Saratoga Symphony. He attended Stanford University, where he was a student of Livermore-Amador Symphony's music director emeritus Arthur P. Barnes.

"There are many choices for entertainment," said Klein, in recognition of how difficult it can be to capture the public's attention. "We in this business have an obligation to provide stimulation of an entirely different sort, and that relies almost solely on the inexplicable power of connected and blended musical sounds to stir our souls to something resembling the same emotions that those other media give us."

"It's my goal to do this by choosing music whose content is full of character and beauty," he added. "In this case we have the added attraction of two remarkable young soloists."

Igor Aprelev, 17, a junior at Amador Valley High School, began studying clarinet in the third grade. He will perform the first movement of Carl Maria von Weber's Clarinet Concerto No. 2 in E-flat.

Since seventh grade, Aprelev has also played alto saxophone, for which he received an honorable mention award in the 2019 Music Teachers National Association Junior Young Artist Competition at the statewide level.

He lives in Pleasanton with his parents, Jenya and Alexander. When not playing music or plowing through mountains of homework, Igor likes to hang out with his friends, ski, ride his mountain bike and swim.

Starla Breshears, 11, will perform the first movement of Joseph Haydn's Violincello Concerto No. 2. She began cello lessons at age 3, and by 6 she was studying at the San Francisco Conservatory of Music, Pre-College Division.

She is the principal cellist of the San Francisco Conservatory of Music Pre-College Division String Orchestra. Starla plays a quarter-size 19th-century Hill & Sons cello on loan from J & A Beare Ltd., London.

The second of six children, Starla's parents are Dustin and Julie; the family lives in San Pablo. She is a sixth-grader at the Crowden School in Berkeley. Besides playing music, Starla's favorite activities are hanging out with friends, eating good food, and playing with her siblings.

The overture to Suppé's 1865 operetta "The Beautiful Galatea" is bright and uplifting. The operetta, one of Suppé's most successful compositions, concerns the Greek myth of Pygmalion, a sculptor who fell in love with a statue he carved and named Galatea.

"Composers through the years seem to have reveled in the opportunity to portray the satanic in music," conductor Klein said. "The resulting pieces are almost always fiery, intense and full of surprising effects. That is true of our two scary pieces, a witchy work 'celebrating' Walpurgisnacht, which is a springtime version of Halloween, and 'The Accursed Huntsman,' in which a hunter, having the temerity to hunt on a Sunday, is cursed and ultimately chased into oblivion by demonic forces."

Jazz band Element 116, featuring young musicians under the direction of Matt Finders, will perform during intermission.

The concert begins at 8 p.m. preceded by a prelude talk from 7-7:30. The Symphony Guild will host a post-concert reception.

Editor's note: Patricia J. Boyle, immediate past president of the California Writers Club Tri-Valley branch, has been writing about the Livermore-Amador Symphony for seven years.

The Impact of COVID-19 on Our High School Juniors and Seniors
By Elizabeth LaScala | 0 comments | 2,889 views

The first few seconds after awakening; before I remember the virus
By Chandrama Anderson | 0 comments | 2,464 views