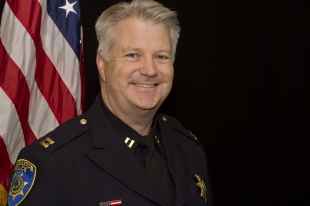 Capt. Craig Eicher has been named as the new interim police chief for the Pleasanton Police Department, effective Nov. 15. (Photo courtesy of PPD)

Pleasanton city officials announced on Monday that Capt. Craig Eicher, a career officer and supervisor with the Pleasanton Police Department, will take over as interim police chief next week upon the retirement of current Police Chief David Spiller.

Eicher, who has climbed the ranks since joining the department as a police officer nearly 30 years ago, has served as a captain for the past eight years, currently overseeing the department's operations division.

Eicher said he is humbled by the opportunity to follow in Spiller’s footsteps as interim chief.

“Chief Spiller has truly done a remarkable job leading the department while serving the Pleasanton community during the past 8 years. It’s been a real honor to have worked with him,” Eicher told the Weekly.

“It is my intention to maintain a high level of professional service for our community as the city works through the process of identifying an ideal successor for the police chief,” he added. “I will continue to operate the department with a focus on our current goals and objectives, in-line with the city’s priorities workplan and the department’s mission during this period of transition.”

City Manager Nelson Fialho, who made the interim police chief appointment, called out Eicher for his years of dedicated service to the department.

"With nearly three decades of law enforcement service to the City of Pleasanton, Captain Eicher brings a depth of experience and professionalism to the interim post," Fialho said in a statement Monday. "I have all the confidence in Craig to continue the continuity of first-rate police services our community is accustomed to."

Eicher's first day in the head chair will be Nov. 15. Spiller announced last month he would be retiring on Nov. 14 after more than eight years at the helm of the department.

According to Fialho, Eicher will serve as interim chief during the recruitment process for the selection of the city's next permanent chief, which is expected to take three to four months.

Eicher said he plans to apply for the chance to make the promotion permanent.

“I have communicated my interest in the police chief’s position with the city manager and I would expect the recruitment to attract many highly qualified candidates,” he said. “Pleasanton is a highly desirable community and I work with many talented individuals who show up to work each day and give their very best to make this community an outstanding place to live, work and play.”

During his rising career, he served as a bicycle officer, field training officer, detective, sergeant, lieutenant and captain.

Eicher holds an associate's degree from Las Positas College, bachelor's degree in administration and justice from California State University Hayward and a master's degree in public sector leadership from Saint Mary's College. He is also a graduate of the FBI National Academy and the Executive Leadership Institute from the Drucker School of Management at Claremont Graduate University.

I am really pleased with the interim appointment of Craig Eicher as police chief, its wonderful to see a Pleasanton resident who has climbed the ladder and is qualified to serve in this position. Craig is not only a resident, but wholly committed to community service. He spends months working with his father-in-law to prepare the Widner's World Christmas lights display for the community, he is board chairman of Hope Hospice and dedicates much of his time for the benefit of those who need their care. As a member of the Community of Character board, he has given of his time and resources to help with scholarships and helping to promote the values of our community. I am really delighted and hope this appointment becomes permanent. Craig is a really caring toward individuals and the community.

Repairing a Disagreement with your Beloved & “Physical” vs. “Social” Distancing
By Chandrama Anderson | 0 comments | 912 views