After 8+ years leading Pleasanton PD, Spiller stepping away next month 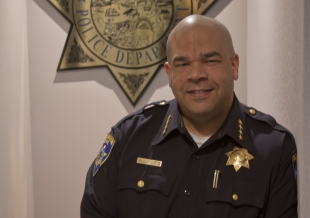 Pleasanton Police Chief David Spiller announced on Tuesday that he will be retiring from the department next month after more than eight years at the helm.

Spiller, who first joined the Pleasanton Police Department as a lieutenant 17 years ago, was promoted to police chief in 2011 after serving nearly eight years as a captain before that.

"I am just pleased to have had the privilege of serving the Pleasanton community," Spiller told the Weekly. "I am proud of the department and all that the men and women of the PPD have accomplished these past years. There are really good people here that care a lot about the service they provide to this supportive community."

"I am eager for a quiet departure, and I hope the Pleasanton PD and the community 'look forward' to what's ahead," he added.

Spiller's retirement will take effect on Nov. 14. An interim police chief has not yet been named. The recruitment process for a permanent successor is expected to last three to six months.

He also built a lengthy educational resume over the years, including an associate degree in administration of justice from De Anza College, a bachelor's degree in organizational behavior from the University of San Francisco and a master's degree from Saint Mary's College in public sector leadership. Additionally, he was a graduate of the California Command College and Senior Management Institute for Police at Harvard University.

Spiller began his police work in the San Diego and Mountain View police departments. He moved to Pleasanton police as a lieutenant in 2002, and the next year was promoted to police captain.

In May 2011, Spiller was appointed as the sixth police chief in city history.

City leaders lauded Spiller for his service and accomplishments in Pleasanton, including modernizing the department's training, technology and equipment, and developing partnerships with police staff, community members and regional stakeholders, including nonprofits, community groups and surrounding law enforcement agencies.

"The safety and quality of life in Pleasanton is a direct result of Chief Spiller's outstanding leadership for the last 17 years," City Manager Nelson Fialho said in a statement. "He served and led every day with compassion, integrity and responsiveness to our city. Dave's extraordinary vision and professionalism will be missed, and we wish him the very best in his retirement."

Jeremy Walsh is the editor of the Pleasanton Weekly and DanvilleSanRamon.com. Reach him at jwalsh@pleasantonweekly.com or 925-600-0840, ext. 118.

I am very happy for Chief Spiller as I know how I have enjoyed my retirement, however I will definitely miss his leadership and his presence in our city. He is a remarkable individual and has brought a spirit of cooperation between our outstanding police force and the community that had not been present to the extent it is now. That is a gift and a legacy that will live on and continue to benefit the community and the police force as well. I thank Chief Spiller for his years of service and investing himself fully in our community, a win/win for all.

Gee I thought he was already retired. He has been conspicuously absent in any press conferences or follow-up to major incidents such as the bank robbery and shoot out in February and the recent fugitive manhunt last week. We will now have two major vacancies in both the police and fire departments. Can we please try this time to hire from within (Fire Dept) and folks who will stay for a substantial period of time?

Frank Capilla is a registered user.

Report Objectionable Content
Email Town Square Moderator
9 people like this
Posted by Brad
a resident of Birdland
on Oct 2, 2019 at 10:07 am

Brad is a registered user.


Dave Spiller is TOP QULITY in every respect. Very Best Wishes for success.
He is young and energetic. He will be a positive contributor in anything he does.

Report Objectionable Content
Email Town Square Moderator
10 people like this
Posted by Becky Dennis
a resident of Foxborough Estates
on Oct 2, 2019 at 10:37 am

Thank you for your years of dedicated service to our community. Best wishes for a happy, healthy retirement!

Report Objectionable Content
Email Town Square Moderator
8 people like this
Posted by Chris Miller
a resident of Carriage Gardens
on Oct 4, 2019 at 10:19 am

Chief--many thanks for your great service to Pleasanton--your support for the Pleasanton Military Families Support Group has always been greatly apprieatied over the years. Your have led a great Police Department with many great police officers, volunteers and support staff. Have a great retirement and always feel free to visit Pleasanton.

The Impact of COVID-19 on Our High School Juniors and Seniors
By Elizabeth LaScala | 0 comments | 1,836 views

The first few seconds after awakening; before I remember the virus
By Chandrama Anderson | 0 comments | 684 views