Uploaded: Aug 19, 2022
Patricia “Pat” Behring, considered the “First Lady of Blackhawk,” leaves a legacy that stretches around the world and a void in the hearts of those who knew her.

She passed away peacefully June 24 at the age of 93, surrounded by the family she loved so much. 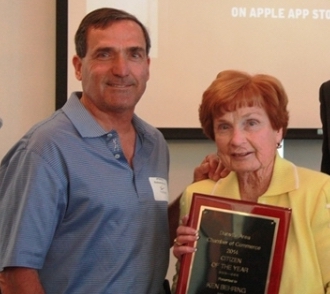 Pat was born in Chicago on Nov. 5, 1928, and grew up in Wisconsin. True to her Midwestern roots, she was self-assured, humble, eager to help and genuinely kind. She graciously opened her beautiful Blackhawk home to her many friends and for fundraisers, was part of many social and community organizations in the Tri-Valley.

She loved her family more than anything, and she made her children, grandchildren and great-grandchildren the center of her universe.

Pat met Kenneth Behring in Wisconsin and they married in 1949. The couple and their three sons moved to Fort Lauderdale, Fla., in 1956. While in Florida, the Behrings welcomed two more sons and Ken started his career as a developer and homebuilder. He created the retirement community of Tamarac, Fla. in the 1960s and developed the Blackhawk community here in the Tri-Valley beginning in 1977.

The family moved to Blackhawk in 1979, eventually into a home overlooking the Blackhawk Country Club and the 18th hole of the Lakeside course.

Pat and Ken shared a love of philanthropy. Pat was a champion for education.

In Florida, Pat raised funds for the Museum of Art and began the Behring Teacher Awards at Pine Crest School. Years later she started a national awards program, the Patricia Behring Teacher of the Year Awards for National History Day.

Pat stood alongside and supported her husband whether he was building his business, buying a football team or doing philanthropic work.

After purchasing the Seattle Seahawks football team in 1988, Ken established the Seattle Seahawks Charitable Foundation, which benefited numerous children's charities, including substantial donations to the Western Washington Muscular Dystrophy Association over many years.

According to a story from 2013, when Ken received our Tri-Valley Hero Lifetime Achievement award, it wasn't until early 2000, after placing a young, disabled Vietnamese girl in her first wheelchair, that he discovered "a life of purpose," leading him to create the Wheelchair Foundation.

Pat loved to go on wheelchair distribution trips all over the world, where she was able to provide the gift of mobility through wheelchairs to people in Asia, Africa and Latin America. She also enjoyed helping the Children of Grace program.

Pat was preceded in death by her parents, her brother Bill, her oldest son Michael and her husband Ken.

She will be missed by everyone who knew her.

Gina Channell Wilcox has been the president and publisher of Embarcadero Media Group’s East Bay division since 2006.

Kelly Winslow is a registered user.


The late Kenneth Behring in addition to being a former co-owner of the Seattle Seahawks along with former Oakland A's owner Ken Hoffman, was also accused and found guilty of sexual harassment while owner of the Seahawks and big game poaching in Africa.

How Much Time do You Spend Outdoors?
By Chandrama Anderson | 0 comments | 1,586 views