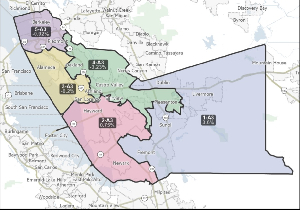 ClaudetteMcDermott is a registered user.

Why not put it to a vote with the people who live here in Pleasanton if they want to be SPLIT up in two?

It makes it all so confusing when you divide a city and a community from the intended property lines. The voice of the majority should be what is making such decisions.

RobertD. is a registered user.


I thought an independent commission is deciding on district maps. What happened?