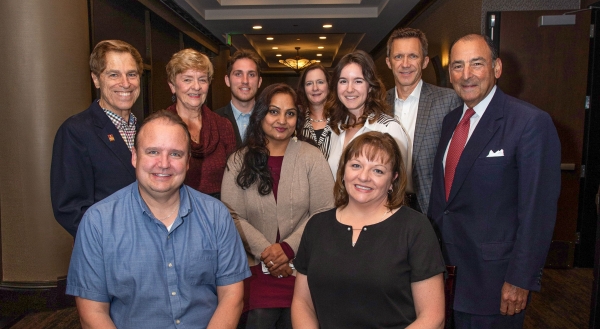 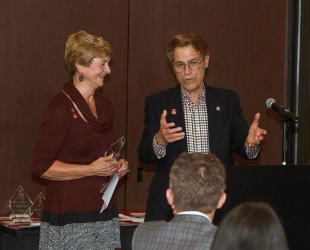 Nearly 100 people attended the evening ceremony in Pleasanton at the DoubleTree by Hilton as awards in eight categories were handed out to residents who have made a notable difference in their community, whether it was raising awareness for a cause, inventing environmentally sustainable products, fundraising for a local charity or starting their own nonprofit organization.

"Our staff decided to create the Tri-Valley Heroes program to recognize those individuals, groups and organizations that stand out because of their actions, integrity and honor," said Gina Channell, East Bay Division president and publisher and emcee for the presentation.

"Whether that hero is someone who gives his life to save another, a young man with a debilitating condition who talks to young people about self image and loving life, or the mother-daughter team that plants a garden to give fresh produce to the local food pantry," Channell added.

Andersen was among the local elected officials in attendance in the DoubleTree ballroom for the ceremony, along with San Ramon City Councilwoman Sabina Zafar and Pleasanton City Council members Karla Brown, Kathy Narum and Jerry Pentin.

"We are surrounded by some amazing people who have done extraordinary things," Channell said. "It is a humbling experience to hear of all the work being done by volunteers -- many working behind the scenes -- to improve our communities and the lives of our neighbors."

Each honoree was selected for their award for uniquely different reasons but all of them emphasized the importance of their community's support toward making a difference.

"The big thing I've taken away from this journey is just that once you start doing things, people are eager to hop on board," Thompson told the audience upon collecting his Arts & Culture award.

Heroes like the Nimmo family of Pleasanton remarked often about being humbled by the attention that evening. Steve and Mannie Nimmo received the Courage award for forming the mental health nonprofit Z-Cares Foundation in honor of their late son Zachary.

"We look at the Courage award and it's humbling for us," Steve Nimmo said. "Sometimes we don't feel very courageous in what we're dealing with, but those that are courageous are these kids that are suffering. We don't want them to suffer any longer."

During his acceptance speech, Lifetime Achievement recipient Mehran said that he never thought of himself as a hero and told audience members to not underestimate their own impact and contributions in the Tri-Valley.

"We have been lucky to be a part of the growth of the valley, but I think the most important thing is the culture of this place, and that culture is driven by people," Mehran said. "Whether you are providing access to art or to the open spaces or giving hope to those who are faced with despair or disadvantage, you are creating the fabric of what the future is of this valley."

The 2019 Tri-Valley Heroes were chosen for their standout contributions to the community that embody the spirit of the following award categories:

With an eye for art and a heart for helping, artist E. Trent Thompson has used his creative gift to bring focus to the homeless in Alameda County through his Pictures for People program. Since 2017, the number of individuals in the county without shelter has grown 43%, and Contra Costa County has also experienced a 43% increase in people living on the streets.

"Pictures for People started with the idea that just looking and showing that you recognize someone can go a long way," Thompson said.

After befriending a homeless woman living outside his Livermore studio, Thompson was struck with the idea to paint her likeness. He began painting, using colors to reveal her personality, with the intention that he "wanted to make her feel seen, to know that people feel for her and that they wish they could help."

Thompson made an effort to become acquainted with other homeless people, getting to know them and then painting their portraits. Six paintings were completed and auctioned off earlier this year; almost $8,000 was raised for local charities that assist the unhoused. Encouraged by the success of the auction, Thompson said another one that's "bigger and better" is on the horizon next year.

Local couple Nancy and Gary Harrington have been adding a splash of color to Pleasanton for many years with their support of local art, including leading guided public art walks downtown.

In addition to art projects supported through their Harrington Art Partnership, the educators and philanthropists also launched the campaign to build a Veterans Memorial at Pioneer Cemetery, and spearheaded fundraising efforts and conceptual planning, which was dedicated three years ago.

They are currently helping the East Bay Regional Park District with the creation of an open-air interpretive pavilion at Shadow Cliffs Regional Recreation Area in Pleasanton. When the project is completed, visitors will learn about the park's history and wildlife while exploring the area sans naturalist.

In the wake of the family tragedy and hoping to start more public conversation about mental health, Zachary's parents, Mannie and Steve, along with their daughter Samantha, formed the Z-Cares Foundation in his memory shortly after his passing to let others know that "it's OK not to be OK."

"We had a choice almost exactly a year ago to either curl up in a ball and never come out again or do something about it," Steve Nimmo said at Monday's ceremony. "We knew that we had an opportunity to help others and help the kids."

Over the past year, the foundation has hosted screenings at local schools and community venues of the documentary "Angst," which examines anxiety and its causes, effects and treatment. The viewings are immediately followed up by discussion panels featuring mental health experts.

The Nimmo family recently became certified in mental health first aid, and plan to help others receive their own certification through Z-Cares. They hope their work will break the stigma of mental health and someone's cycle of suffering.

"We want to make it so if someone's suffering from a mental health disorder, it's OK to raise their hand," Steve Nimmo said. "It's a real problem, and we're out there trying to do things."

Over the past two decades, Tri-Valley Conservancy has strived to protect open space for local parks, trails, farms, ranches and wildlife habitat. More than 5,400 aces of open space have been preserved for Tri-Valley residents since the group formed.

The conservancy also uses conservation easements or acquisition to protect wildlife and link open spaces, like when 74 acres was acquired and merged with Sycamore Grove Park in 2014. The additional land provided a wildlife corridor, public access and trail connections to parks in Del Valle Regional Park and parks in Berkeley, Fremont and Sunol.

Darrell Jobe has been giving both packaging products and people second chances for nearly five years.

In 2015, Jobe founded Vericool in Livermore, where the company manufactures 100% recyclable, 100% compostable packing containers from renewable and post-consumer materials and compostable insulation.

Aware of the stigma that formerly incarcerated people face trying to find a job after being released from jail, Jobe, a former gang member, hires them at his company to help them build better futures.

While on staff at The Californian, the student newspaper at San Ramon's California High School, Vidhima Shetty wrote a story about a Cal High graduate who was afflicted with chronic fatigue syndrome.

Shetty's story resonated with readers across the globe, who thanked her for giving a platform to the condition that affects 1.5 million to 2 million Americans, but is not widely understood. Diving into the subject even more, Shetty conducted extensive research and sought out medical professionals to review her findings, which she published in a 122-page book, "An Adolescent's Guide to ME/CFS."

The proceeds are donated to the Open Medicine Foundation, which is doing research to find a cure.

Shetty, who is now pursuing a double major in English and economics at Columbia University, was in the throes of midterm exams this week and could not attend the ceremony. Her family accepted the Heroes award on her behalf.

When Dana Dornsife's brother-in-law, Mike Miller, was diagnosed with pancreatic cancer, Dornsife worked to find a clinical trial for Miller that let the family have more time together.

She formed the Danville-based nonprofit Lazarex Cancer Foundation in 2006, which works to remove barriers to clinical trials for advanced stage cancer patients and medically underserved individuals.

Since then, Lazarex has found its niche as the only nonprofit working to give patients access to clinical trials. Lazarex assists with costs for FDA clinical trial participation, identification of clinical trial options, community outreach and engagement.

Dornsife was unable to attend the Heroes ceremony because she had an already scheduled trip to Washington, D.C., to advocate on Lazarex's behalf in the nation's capital. Her sister Erin Miller accepted the award.

Alex Mehran Sr. said his parents saw "potential and vitality" when they settled in the Bay Area almost 70 years ago after immigrating to the U.S. from Iran.

Since then, Mehran said he has made it his life's work to reveal the full potential of San Ramon and the Tri-Valley through environmentally conscious development. Sunset Development is a green company, counting Bishop Ranch and its highest concentration of LEED space outside a major metropolitan area, green cleaning practices, recycling initiatives and prized transit system among their best known projects.

"Just as my parents saw potential and vitality 70 years ago, you sitting here tonight envision what this valley will be like 70 years from now," Mehran said. "It will be vastly different than what it is today, and I think much better than what it is. I am grateful to be part of that transformation."

Under Mehran's guidance, Sunset erected City Center Bishop Ranch, a retail and entertainment hub in the heart of San Ramon that opened last year and attracts hundreds from across the Tri-Valley with its upscale shops, restaurants and a multiplex cinema. Additionally, the firm constructed the new San Ramon City Hall on behalf of the city in 2016 as part of the Bishop Ranch expansion.

Mehran also heads the Masud and Alex Mehran Foundation, which gives tens of thousands of dollars annually to educational, health and human services organizations, as well as Iranian cultural institutions.

Profiles on each award recipient will run as a series in the Pleasanton Weekly and online at PleasantonWeekly.com and DanvilleSanRamon.com beginning next week.

Repairing a Disagreement with your Beloved & “Physical” vs. “Social” Distancing
By Chandrama Anderson | 1 comment | 1,978 views

Get fact-based reporting on the COVID-19 crisis sent to your inbox daily.