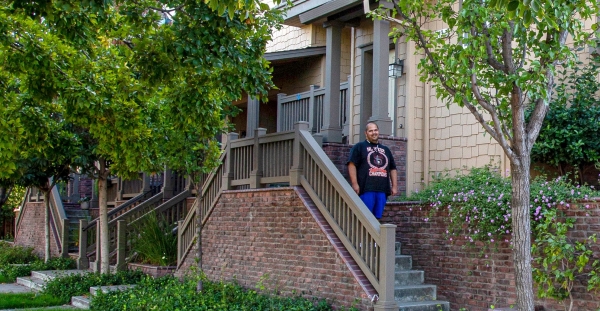 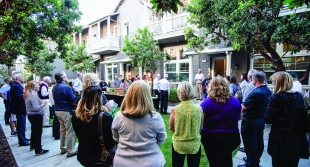 Purchasing one house represents a major milestone for any organization focused on offering affordable, independent-living opportunities for adults with developmental disabilities.

The local nonprofit, which maintains a handful of homes in Pleasanton and Livermore where more than 30 adults with special needs reside independently, increased its inventory for the first time in over a decade earlier this year by acquiring two townhouses in the Station Square development in Livermore -- properties the city had owned for affordable housing, but were ready to sell.

"We're thrilled that we finally have been able to get two new homes in the Tri-Valley," Sharon Almeida, vice president of the REACH Board of Directors, said during an interview a few days after the nonprofit hosted an open house for families, volunteers and supporters at Station Square now that REACH's new tenants have moved in.

"There's a tremendous housing shortage ... particularly for the super-low-income folks that we serve and particularly our demographic of serving developmentally disabled adults," she said.

"We haven't been able to acquire any properties in quite some time because, of course, prices have been so high. So we were thrilled when the city of Livermore tapped us and said, 'Not only can you buy one house, but would you like to buy two?'" Almeida added.

"For us and Joey, it's a big impact," according to Mike Balero, father of one of the new REACH tenants at Station Square.

"With Joey, he's never lived on his own before. He's 33. Moving in with something like this, for him, has shown us that he's able to live on his own. His self-confidence has been boosted," Balero said. "It's amazing what these young men and women can do when you give them an opportunity."

Established 29 years ago, Tri-Valley REACH (officially named Resources Education Activities Community and Housing for Special Adults of the Tri-Valley) strives to provide affordable, quality and safe homes for adults with developmental disabilities to live as independently as possible.

In addition to the main priority of affordable housing, REACH supports Pleasanton RADD (Recreational Activities for the Developmentally Disabled) through grants for Special Olympics activities.

REACH is a registered nonprofit that receives no federal or state funding, so it relies on private donations, corporate contributions and support from the cities of Pleasanton and Livermore to accomplish its goals for adults with disabilities.

And the need certainly exists.

The Regional Center of the East Bay, in its latest projections, estimated the number of housing units to accommodate those with disabilities who desire to live independently by 2023 in Alameda County is 5,500 units, according to Kay King, board chair for REACH. The count in Pleasanton was 233 units and in Livermore was 296.

REACH currently owns and maintains 11 homes in the Tri-Valley -- six in Pleasanton, five in Livermore -- that it rents to adults with developmental disabilities who typically fall into the low or extremely low income affordability category, below 30% of the area median income index.

Tenants must be members of the Regional Center, a social services agency supporting people with developmental disabilities, that will coordinate independent living services through an approved provider of the tenant's choice. REACH is the landlord and property manager, so to speak, and the ILS agencies help tenants with individualized needs such as grocery shopping, meal planning, budgeting and medical appointments.

A longtime REACH supporter, Almeida is someone who knows the nonprofit's impact, from both sides.

"For my family, it was life-changing," she said.

Nearly two decades ago, her stepson Victor moved into their home as a 19-year-old, previously undiagnosed with a developmental disability, while the Almeidas were raising their two young children. REACH and social services organizations were vital in helping their family during the crucial time.

"Once I found out who REACH was, and he started getting on track and progressing with his goals, then I just started volunteering because it was so important for us and I felt it was important to give back," Almeida said.

Victor is now 39, and after living independently in the REACH setting, now resides in a home of his own.

"He can live independently with his ILS support, and I was able to buy him a home to live in. So now I know he's always good, in case anything were to ever happen to me. And that's a big concern for parents," Almeida added.

REACH, which currently has a prospective tenant waitlist of 77 people, had been working to improve its properties and expand its community impact but had not been able to purchase any additional homes since before the recession.

"All related to the lack of affordable housing, the downturn in the economy and skyrocketing housing prices," King said. "REACH cannot acquire a property in the traditional financing manner. It requires unique financing and working with our cities to create a financial model that is sustainable."

Such an opportunity finally presented itself about two years ago.

The city of Livermore during the recession acquired five properties in the Station Square development for affordable housing, but in the past couple years decided they wanted to sell the townhomes but still keep them within the low-income community, according to REACH treasurer Patrick O'Brien. Three were sold to qualified buyers and the remaining pair were offered to REACH.

"We're kind of a known commodity to the city of Livermore. They reached out to us, and we indicated that we were very interested," O'Brien said.

"If for any reason the property were not to be used for that purpose, they can step in and basically demand payment of what we call 'a sleeping second,'" he said. "And that has been a process used both by the city of Livermore and the city of Pleasanton through the years, and most of our houses are in a similar situation. And the whole purpose there is that's the city's contribution to allow these homes to be available at a rental level this community can afford."

The acquisition process took about 18 months, culminating in six REACH tenants moving into the two townhouses about a month ago. It was the first time the nonprofit ever purchased multiple homes at the same time.

One unit has three bedrooms and 3-1/2 bathrooms; the other is a three-bedroom with 2-1/2 bathrooms. Both are two stories, located not far from each other in the complex but not adjoining.

Both were pretty much move-in ready, originally constructed in 2007. Each unit has three tenants, all men. (REACH separates its homes by gender; this round just happened to be all-male.)

Three of REACH's Station Square tenants are new to the program, off the waitlist and living on their own for the first time. The other three are tenants who moved over from another REACH property, which is now being remodeled and on track to reopen next month to house four new tenants off the waitlist, according to Almeida.

"One of our tenants that we just relocated, he works across the street at Safeway so he was real excited because now he can walk to work every day," she said.

Yvonne Ballou, a Livermore resident whose son Steven moved into one of the units last month, said the transition has taken some getting used to for the whole family, and they're grateful for the experience and opportunity.

"His very first day in his new home brought out all different kinds of emotions," she said. "That seems to be diminishing as he becomes more acclimated to his new home and sees that we are still there supporting him."

"The importance of having housing opportunities in the Tri-Valley is for the families that are there to offer support from afar to their disabled young adults but still let them learn and share the responsibilities with their housemates," Ballou added. "With the rising cost of housing, it's already difficult for these men and women to have an opportunity to live on their own without programs like REACH."

"As I've noticed in the last couple weeks, a big change in just his attitude and doing things," he said. "The two gentlemen that he's with are really good guys. They've gone out to get something to eat together and do different things."

"It's kind of an amazing transformation, from kind of just being at home and going out with his friends once in a while, to actually living on his own. It's a big change. There's a lot he's going to have to learn," Balero said. "There's a road ahead for us, but there's also light at the end of the tunnel."

REACH, their new tenants and the families celebrated the Station Square acquisition with an open house on Oct. 2, with several dozen people onhand including longtime REACH tenants, volunteers and supporters of the nonprofit, and city officials.

The event demonstrated "a beautiful community feeling," a true sense of the community impact REACH provides, according to King.

"We got to talk to the parents and just the excitement for their child to be able to live independently ... and then again, just like any parent whose child, whether or not they have a disability, the anxiousness of them going out on their own," she said, continuing:

"And with the tenants, talking to some of the guys, again they were excited. They wanted to live on their own. They'd been waiting for a long time.

"And the exchange of some of the neighbors with the parents of the tenants, they exchanged phone numbers -- like, 'if you need anything, just call on us. We're here. We love this little community. We all get together.'

"I came away feeling like: Oh, here is really the essence of what REACH actually promotes, and it's working. And it's been working for a very long time."

Editor's note: Photographer Mike Sedlak, a frequent freelancer for the Weekly who covered the REACH open house for this story, is a member of the REACH Board of Directors.

Erika is a registered user.


This is just wonderful to read! Very happy for the new residents able to live with their peers and get help as needed but still feel like they are independent. Great way to support these members of our community.

What a great story! All of REACH volunteers should be commended for their tireless efforts for these special members of our community.

Repairing a Disagreement with your Beloved & “Physical” vs. “Social” Distancing
By Chandrama Anderson | 0 comments | 1,082 views