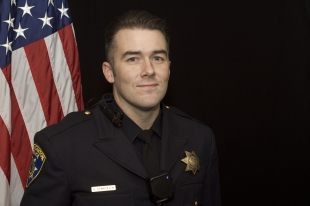 Kyle Henricksen, a Pleasanton Police Department officer whose battle with aggressive pancreatic cancer inspired support from throughout the community over the past year, died on Tuesday night surrounded by family. He was 36.

News of Henricksen's death was originally shared by his wife Jenn in a heartfelt remembrance on social media on Wednesday morning, with Pleasanton police officials paying tribute to their fallen colleague of 10 years later in the day.

"Last night we lost the greatest man I've ever known," Jenn Henricksen wrote, in part, on the GoFundMe page that friends and family, along with many people who'd never met Henricksen, used to track his journey with cancer. "The greatest husband, father, son, brother, friend anyone could ask for. I met Kyle when I was 18 years old and have loved him every moment since. We created the kind of life that people write stories about."

"One thing I'm incredibly proud of is that Kyle and I with our gremlins really lived, we never just existed," Jenn Henricksen said in the post. She continued:

"His passing was peaceful and calm. We were all here, everyone he loved most in this world, holding him and letting him know how much he is loved and adored and that he would be with us always, on any adventure that comes our way moving forward he will be with us and he knows that we will be OK."

Henricksen, a career law enforcement officer and the married father of four children from Manteca, was diagnosed almost exactly one year ago with Stage 4 pancreatic cancer that metastasized to his stomach lining -- a rare diagnosis for someone 35 years old.

"Kyle left us all with a sense of awe and amazement in his courageous and remarkable fight, defying odds and exhibiting amazing strength with a smile he shared so easily and so frequently with others," Pleasanton Police Chief David Spiller said in a statement Wednesday.

"Kyle touched us all in ways that we will be forever grateful," Spiller added. "Now we reflect on our time with Kyle as a gift in each of our lives."

Flags outside city buildings will be lowered to half-staff for the rest of the week in Henricksen's honor, according to City Manager Nelson Fialho.

"I'm very saddened by the loss of Kyle, our co-worker and friend," Fialho said. "He was an exceptional officer and his presence will be missed in our organization and community. On behalf of the city, we are eternally grateful to Kyle and his family for the decade of service to Pleasanton."

A public memorial service to honor Henricksen will be held this Friday (Oct. 25) at 10 a.m. at Cornerstone Fellowship at 348 North Canyons Pkwy. in Livermore. In lieu of flowers, the family requests donations be made to the National Law Enforcement Cancer Support Foundation (www.lecsf.net).

Born and raised in Manteca, Henricksen earned an associate's degree from San Joaquin Delta College in December 2004 and later completed a Bachelor of Science in criminal justice management from Union Institute and University.

He began his law enforcement career in June 2005 as a recruit with the Alameda County Sheriff's Office, where he worked as a deputy-sheriff for three years before transferring to Pleasanton PD as a police officer in January 2009.

Henricksen served in various assignments during his career in Pleasanton, including six years as a patrol officer and four years as a motor officer in the special operations unit. In the latter role, he conducted special enforcement assignments on problem roadways, and worked countless traffic collisions, where he was often commended for his diligent and thorough investigative skills, city officials said.

He also worked a number of community outreach assignments, including the School Valet Program, the old First Wednesdays Street Fairs, Special Olympics, Read Across America, Coffee with a Cop and Cone with a Cop.

Henricksen, who was a board member of the Pleasanton Police Officers Association, also participated in a mutual aid response to Sonoma County during devastating wildfires.

Away from the office, Henricksen enjoyed spending time at home in Manteca with his family. He and wife Jenn had two biological children Zoey (12) and Cohen (10), and they raised their niece Alyssa (18) after the death of Henricksen's brother and raised Jenn's younger sister Destani (19) from a young age.

Family members said Henricksen's favorite activities with family included going to the movies, kayaking, camping and fishing. He was an avid reader and explored hobbies such as woodworking and playing the guitar, banjo and harmonica.

He enjoyed watching his San Jose Sharks and Oakland Athletics, as well as loved useless trivia -- and had an endless supply of it, family said.

City officials added, "His witty sense of humor was uplifting and appreciated by all. Kyle will be missed by all in our organizational family and community."

The Henricksen family announced his diagnosis of Stage 4 pancreatic cancer in November 2018. Their "Help Kyle Kick Cancer" GoFundMe page, in addition for people to donate in support of medical expenses and other needs, served as a venue for the family to update supporters on his experience with cancer -- a personal diary with stories, photos and videos of the good and the bad as they navigated his treatment.

The community raised more than $123,000 as of Monday morning, with donations still arriving.

"Thank you to everyone who has reached out. We appreciate our VILLAGE and would not have been able to get through this last year without you all," Jenn wrote on the page Wednesday. "#KyleKicksCancer #KylesVillage #Henricksen6 #HisFightIsOurFight #MyLove #MyHoney #MyLobster"

Following this story, what an example of what real family and love looks like. RIP Kyle....

I donated to their GoGundMe campaign for Kyle and followed along on his status through updates sent out by his wife Jennifer. Pancreatic cancer is bad news, but I held onto hope that things would turn around for Kyle. So it was a bit of a surprise and shock when his wife sent an update about a week ago saying that Kyle's condition had deteriorated to the point that the doctors advised that chemo was no longer recommended for him and that the battle was effectively over for him. A second shock occurred when she sent another update today saying that he had passed away. Out of the sadness, though, it's wonderful that he was surrounded by so much love from his wife and family during his final days.

There was a computer science professor, Randy Pausch, who authored a book titled "The Last Lecture" on his experience dealing with terminal pancreatic cancer, and he wrote that one of the best things that you can tell a loved one who will be passing away is that whatever happens they will never be alone because a part of you will always be with them.

As for pancreatic cancer, a major reason that it's so deadly is that it silently grows without any symptoms until it is too late. I think that we need to support more research into this kind of cancer. A cure for pancreatic cancer would be great, but even better medical diagnostic tools and medical tests which would be able to detect this type of cancer much earlier in its growth would save many, many lives.

Sad is a registered user.


This is so heartbreaking. I was praying that he'd somehow beat it. More research funds need to be allocated toward research for this type of cancer. The cure rate has not changed in 40 years. I am praying for his family.

Repairing a Disagreement with your Beloved & “Physical” vs. “Social” Distancing
By Chandrama Anderson | 0 comments | 1,069 views