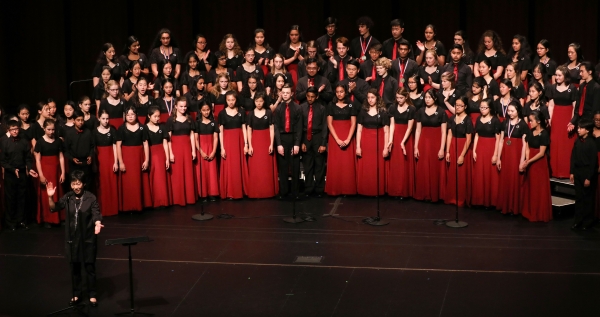 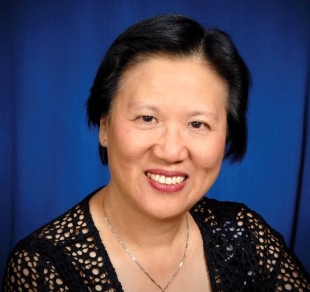 "It is free -- and it accompanies you everywhere you go," said Chow, who was inspired by composer Zoltan Kodaly's philosophy that the singing voice should be every child's first and lifelong musical instrument.

Chow is being honored next Tuesday with a 2019 Alameda County Arts Leadership Award for founding the Cantabella Children's Chorus in 1992. The other countywide recipients are Kendra Barnes and Laura Elaine Ellis (joint award), Suzanne Gayle, James Gayles, and Rob Jackson.

"I have a master's degree in music education from the University of Iowa," Chow said, "and view myself as a music educator who nurtures and trains young musicians through choral singing, piano playing and conducting."

Her two children, now grown, inspired her to found the Cantabella Children's Chorus when they were 8 and 6. She was teaching them piano using the Suzuki method, and was driving her daughter from their home in Livermore to Oakland twice a week to sing with the San Francisco Girls Chorus, where she would observe the sessions.

"I had to fight the traffic on a weekday, stay two hours, and fight the commute traffic coming back," Chow recalled.

Plus, of course, her son could not join the girls' chorus.

"I wanted my children to sing when they were young, besides playing the piano," Chow said. "It helps to find your voice when you are young. When you try to find it as an adult, it is so much harder -- there is insecurity and baggage already."

She also likes the community aspect of singing.

"Learning to play the piano is lonely, but in a choir the bonding is special when you are singing with a group of people," she said.

Chow had 15 young piano students at the time and reached out to their families.

"I offered to them that if I could get at least 10 to sign up to sing together, I could start a group here," she remembered.

Eleven made the commitment, and Cantabella Children's Chorus was born -- right in her living room -- where she used Kodaly's method, originated in Hungary.

Chow believes in prompting children to use their naturally high voices.

"Their vocal mechanism is still maturing so we don't want to mess with it," she said. "It can be heard when they sing as a group."

"During the early years, we had kids who came with no concept of how to use their singing voice," she added. "One of the most satisfying things was helping supposedly tone deaf children to find their voice and enable them to sing in tune."

She chose the chorus' name from the Italian words "canta" and "bella."

"That translates to 'sing beautifully,' and that was my founding vision for the chorus," she said.

Chow was the sole teacher for a few years, and the children continued to gather in her home.

"Then it got too big. I had different groups coming on different days," Chow said.

One of the choir moms, Laurie Stull-Lane, applied for nonprofit status for the group.

"We then became a community choir rather than an extension of my piano studio," Chow explained. "We were able to rehearse in churches."

They began at Granada Baptist Church in Livermore, where the chorus still practices to this day, then expanded to Valley Community Church in Pleasanton. A few years later, they grew to another site in Dublin, which moved to San Ramon. Then last year when Contra Costa Children's Chorus closed for lack of enrollment, its members joined Cantabella, resulting in a fourth location, in Lafayette. Now Cantabella has more than 250 singers, from kindergartners to high school students.

"We come together for performances and get a nice full choral sound," Chow said.

Looking back at its founding 27 years ago, Chow is amazed.

"My motive was to provide a quality choral community for my own two kids," she said.

One of her greatest satisfactions has been the pride and joy on the faces of her choristers performing in public for the first time, such as when they were featured by the Livermore-Amador Symphony Orchestra as special guests or cast as street urchins in Livermore Valley Opera's production of "Carmen."

She credits God for giving her the passion to strive for excellence to offer the best to the children who have come through her program.

She also thanks her husband Bob, her children and all the choral parents through the years, who volunteered their time and talents to make the program a success.

"They trusted their children's music education to me, especially in the early days when I did not have a choir," she said, "And many of them tenaciously stuck with the program for many year."

She is also grateful to her committed staff and board members. Chow passed her conducting baton to Eileen Chang, who became director in 2007.

"She's successfully taken over," Chow said. "Just this past summer she took the Cantabella Tour Choir to the World Youth Choral Festival in Jeju, South Korea, and came home with two Gold Prizes plus the Grand Prix top prize."

Chow recently moved back to Fremont where she continues with her piano studio. And she continues to attend Cantabella board meetings as director emeritus.

She loves seeing Cantabella alumni continue to cherish the joy of singing together.

"Some of them have become music, choral and theater directors themselves and several have returned to help at Cantabella," she said. "That is very satisfying."

"The miracle was not in starting the choir or growing the choir but how much fun I had -- how much joy it brought me," she added.

Bee Chow, who lives in Fremont, was chosen from District 1 for the 2019 Alameda County Arts Leadership Award. The other recipients are as follows:

District 2: Suzanne Gayle is an established artist and has created more than 100 public artworks including murals, paintings and sculptures located at municipal sites, schools and libraries throughout Alameda County and the greater Bay Area. Local public commissions include projects in Castro Valley, Dublin, Hayward, Fremont and San Leandro.

District 3: Kendra Barnes and Laura Elaine Ellis of San Leandro are the co-founders and co-directors of the Black Choreographers Festival, which is a yearly event celebrating African and African American dance and culture with dynamic annual performances culminating at Laney College in Oakland. They are also dance educators and lead their own nonprofit arts organizations that support and promote dance and performance.

District 4: James Gayles of Oakland is known for his distinctive watercolor portraits. He attended Pratt Institute in New York, and when on staff at NBC Television, he won an Emmy for his graphic illustrations. His artwork has been published in the New York Times, Essence Magazine, Preview Magazine, Black Enterprise Magazine and Random House. He moved to Oakland in the mid-1980s, and while he was working as a newspaper illustrator for more than 20 years, his artworks were featured in all of the major Bay Area newspapers.

District 5: Rob Jackson of Oakland is a founder and the executive director of Beats, Rhymes and Life in Oakland. He is a passionate community leader, educator and multi-faceted artist, dedicated to creating a community-based organization that identifies strategies to address socioeconomic injustices and mental health disparities.

The awards will be presented in conjunction with National Arts and Humanities Month during the Board of Supervisor's public meeting at 10:34 a.m. this Tuesday (Oct. 1) at the Alameda County Administration Building, Supervisors' Chambers, 1221 Oak St., 5th Floor, in Oakland. This event is open to the public.

Bee Chow, director emeritus of Cantabella Children's Chorus, serves as festival director for the Young Voices in Harmony Festival, a biennial international youth choral event sponsored by Cantabella that features high school choristers. The day-long festival, being held April 17-18 at St. Elizabeth Seton Church in Pleasanton, is preceded by a hands-on teacher workshop for music educators the night before and ends with a concert that is open to the public.

The first few seconds after awakening; before I remember the virus
By Chandrama Anderson | 0 comments | 3,383 views

Be aware of hyperbole in numbers and media hype
By Tim Hunt | 14 comments | 1,436 views