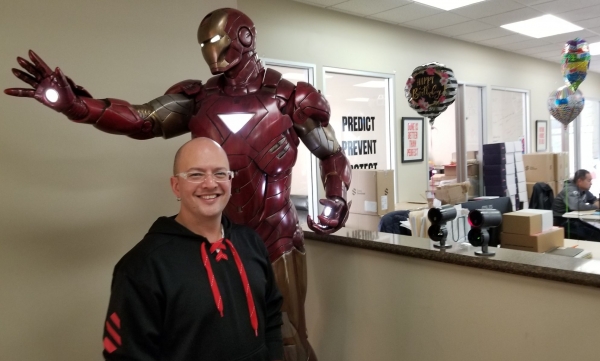 Dave Selinger, CEO of Pleasanton-based Deep Sentinel, celebrates the success of the company's home security system in deterring a package theft from the porch of a customer in York, New York. (Photo courtesy of Deep Sentinel)

The co-founder of Deep Sentinel was celebrating the success of the company's home security system in deterring a package theft from the porch of a customer in York, N.Y. Their system, now in the beta phase, was being monitored from the company's headquarters overlooking Main Street in the Kolln Hardware building in downtown Pleasanton.

The employee, a former police dispatcher, noticed a suspicious person pedaling his bicycle by the house as if casing it. When the thief went to pick up the package, the system lit up and the 104-decibel speaker amplified the monitor's voice when she ordered the man to put the package back. He did and then took off on his bike.

It was powerful affirmation to Selinger and his team that their system will do what they planned as they developed it. It includes three custom-made cameras with huge batteries and speakers and a wireless hub powered with artificial intelligence. Each system is monitored 24/7.

The company, incorporated in 2016, has about 50 systems operating in homes during its beta phase.

The idea for Deep Sentinel grew out of an ugly incident in Selinger's west Pleasanton neighborhood where a resident was hit with a home invasion robbery. The ensuing homeowner association meeting led him to check out all of the home monitoring services. The systems all had the failure of doing little -- other than signage -- to prevent break-ins.

He also talked with Police Chief Dave Spiller and other Pleasanton officers to gather their thoughts. They told him about one Pleasanton neighborhood where a resident wired cameras to all of the homes and then stayed up all night watching the cameras to alert police to any potential break-ins. That type of system would cost about $3,000 a month per homeowner.

When he started the firm, Selinger hoped to cut the cost to $200 per month, and they now are planning on $50 per month with $399 for the equipment. The equipment cost about $600 so, like the wireless companies used to do, Deep Sentinel is subsidizing the purchase. They considered using off-the-shelf equipment, but concluded they needed better equipment.

The robust camera spans 130 degrees and is linked to the heart of the system -- the artificial intelligence that screens out animals and disturbances to limit false alarms. Once the system alerts a monitor, they swing into action within a guaranteed 30 seconds to deter the potential thief. The human verification eliminates the false alarms that are the bane of police departments everywhere. The alert screen also includes a link to the local police department.

The York customer, Joe Maselli, previously had a Ring system that worked fine during daylight hours. He was twice victimized -- once when he left his garage door open at night and turned off the alerts on his mobile phone. That thief took his time and made a few visits to clean out the valuables, Maselli told Selinger. The second incident, again at night, involved opening his car which he had a failed to lock. The 24/7 monitoring coupled that allows the intervention instead of recording the theft.

"To know that I have a security system that not only records events as they happen but having agents that intervene and prevent a burglary on my behalf makes me feel at ease about Deep Sentinel's security system. To me, it's worth it! Even the police that responded to the incident were impressed by the system and how a Deep Sentinel agent who viewed my camera remotely was able to stop a thief from stealing my package from my front door," he told the company.

As Selinger and his team look at the marketplace, they believe it is huge because there are between 2 million and 3 million burglaries annually in the United States. Once people have been victimized, Selinger believes his system will be an easy sell. During his research, he checked monitoring cameras and learned how thieves were working neighborhoods just like Realtors once farmed neighborhoods.

One set specialized in mail theft. They would work the neighborhood every two to three weeks, go through the mail and meticulously put it back in the mailbox. Residents had no clue that their mail had been rifled. Last month, we learned that new credit cards we had ordered had apparently been stolen from our mailbox and used for unauthorized purchases. Fortunately, the issuing company had a robust security system, and we were able to cancel that card and get a new one.

The public launch date has not been set, but interested people can sign up for an email alert on the website: www.deepsentinel.com. The firm employs 45 people, with about 25 in Pleasanton and 20 in Taiwan.

It should be noted that like other locally based startups, Selinger had a choice of where to locate his company. He selected Pleasanton where he lives in a non-gated neighborhood and his daughters attend public schools. His west Pleasanton neighborhood has convenient access to Pleasanton Ridge for mountain biking, and he is 15 minutes or less away from the office depending on the traffic lights. His family has lived in Pleasanton for about eight years.

Repairing a Disagreement with your Beloved & “Physical” vs. “Social” Distancing
By Chandrama Anderson | 1 comment | 1,864 views