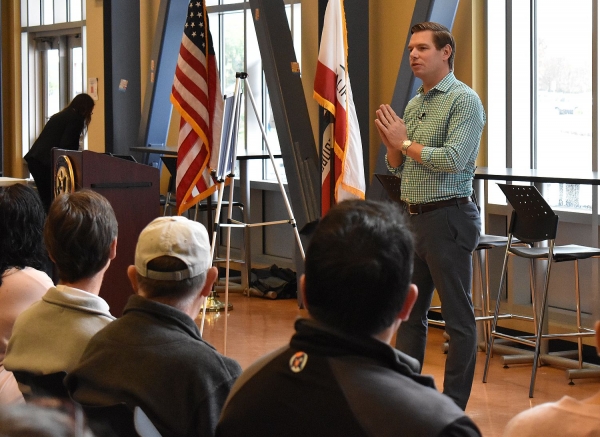 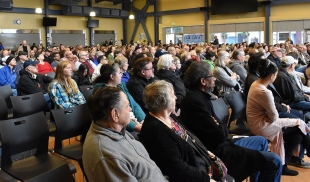 Over 400 community members gathered in the Dublin High multi-purpose room to hear about Swalwell's policy priorities and to ask questions of their own. (Photo by Erika Alvero)

In his first town hall meeting after the midterms, U.S. Rep. Eric Swalwell spoke at his alma mater of Dublin High School on Saturday morning, addressing current affairs both local and national and responding to concerns of his District 15 constituents.

Despite the rainy weather, hundreds of community members crowded into the school’s multi-purpose room to hear the 38-year-old congressman talk about his own policy priorities and take questions from attendees.

The theme of “American values” and the idea of an American promise for all echoed throughout the event.

“If you work hard, your paycheck should grow, you should have a health care guarantee, and regardless of what community you live in, your kids should have school that will prepare them for the future,” Swalwell (D-Dublin) said in his closing statements. “I think that’s the bargain of America.”

The town hall also comes about five weeks after the birth of his second child, Kathryn “Cricket” Swalwell -- a fact noted by attendees in their comments and on the congressman’s social media account, as he joked that his constituents used to chat after the town hall, but now only wanted to see baby pictures.

And it was just a few days after Democratic Leader Nancy Pelosi nominated Rep. Barbara Lee (D-Oakland) serve alongside Swalwell and Rep. Rosa DeLauro (D-Conn.) as co-chairs of the House Steering and Policy Committee, bringing another East Bay representative to the leadership team.

California and the Bay Area will benefit from the high representation in leadership positions, Swalwell said during a media event prior to the town hall, particularly regarding infrastructure issues. His biggest priority here is extending the rail transit from Dublin-Pleasanton over the Altamont Pass, he said.

“We have the best chance since I’ve been elected in finding federal dollars that can help that project,” he said.

The next big item for him on the agenda, he said, was voting rights reforms through House Democrats’ recently unveiled HR 1, which seeks, among other things, to make voting an easier and more accessible process and to “end partisan gerrymandering,” according to a recent Washington Post op-ed by Reps. Pelosi and John Sarbanes.

Swalwell pointed to voter suppression efforts seen in the recent election as evidence that voting reform needed to happen.

“I believe that the long-term solution for voter engagement and voter security has to be that we move toward secure, honorable, online voting,” he said.

Education threaded throughout the talk, under the umbrella of many different topics. Building new, modern schools would help ensure all students -- regardless of community -- had access to a quality education, he said, but also protect against the threat of automation to American jobs, after one audience member expressed that concern.

“What I want to do is make sure that by building modern schools in every community, that we’re preparing our kids to have the ability of skill, so that even as weather changes in the workforce, they will continue to have careers,” Swalwell said.

He also emphasized his ongoing plans to address the student debt crisis -- his “college bargain.”

“If you work through college, if you do work-study through college, and you get out and you commit to serve a community in need, you will have a debt-free education,” he said. “I would also hold these institutions more accountable.”

And reporting from Washington, he addressed questions on developments in the Mueller investigation, along with the recent turnover of the House majority party and the new demographic makeup of House leaders.

Swalwell noted that 27 newly elected members of Congress were in their 40s or younger.

“This transformation of leadership is coming, I think that’s a good thing,” he said. “We’re a Congress that has not necessarily been that youthful or diverse before. I took our leadership picture yesterday, and to see African-Americans, Latinos, a 31-year-old -- I’m a 38-year-old, I’m the old man on the block now. It’s a leadership team that looks like America.”

This was relevant, he said, in particular when considering issues such as gun violence -- something that young people reported to be one of the foremost issues on their minds.

And on the long-term effects of “Individual No. 1” (as one attendee put it) on the nation’s emotional psyche, and to political norms going forward?

MichaelB is a registered user.


"He also emphasized his ongoing plans to address the student debt crisis -- his “college bargain.”“If you work through college, if you do work-study through college, and you get out and you commit to serve a community in need, you will have a debt-free education,” he said. “I would also hold these institutions more accountable.”

Another irritating and predictable "don't worry,it's free" program from so called progressive politicians. Who is going to hold Swalwell accountable for letting students borrow money they can not afford/do not intend to repay - and then sending the so called "bargain" to the taxpayers?

6 people like this
Posted by Robert Adam
a resident of Another Pleasanton neighborhood
on Dec 5, 2018 at 5:04 pm

When is Mexico going to pay for the wall?

Report Objectionable Content
Email Town Square Moderator
2 people like this
Posted by David
a resident of Alisal Elementary School
on Dec 5, 2018 at 6:43 pm

David is a registered user.


Some would say its outside of a US Rep scope but I’d like to hear about leadership to address transportation networks and substantial highway improvements to address a growing population, crowding and gridlock in the Tri Valley. I580 is a major hub for trucking to the Port of Oakland and serves as an important route to Los Angeles, Central Valley and Silicon Valley. Also, an earthquake evacuation route. We need another highway and to expedite the Hwy84 completion. Local agencies charged with these tasks are too many, competitive for money and inefficient.

Report Objectionable Content
Email Town Square Moderator
12 people like this
Posted by Pleasanton Parent
a resident of Pleasanton Meadows
on Dec 5, 2018 at 10:02 pm


The bart extension and an end to gerrymandering are good initiatives. I can support swalwell on those.

Working hard and seeing income grow - sorry, you must deliver incremental value. Effort is not enough. You get a participation trophy for trying swalwell.

Debt free education? Holding institutions accountable? For what, billing students to learn based on union negotiated/guaranteed pensions? How about attacking what makes education expensive vs forgiving debt? Make it affordable for all - not endentured servitude in the public sector to for assimilation into big government.

This is what we get when we elect someone that has never been accountable for delivering a tangible benefit/product. A market pull vs push.

Report Objectionable Content
Email Town Square Moderator
2 people like this
Posted by Pleasanton Parent
a resident of Pleasanton Meadows
on Dec 5, 2018 at 10:10 pm

...and we shouldn't fear automation, we should be investing in programs to help transition the workforce, not "protect" it from evolution.

Report Objectionable Content
Email Town Square Moderator
3 people like this
Posted by Philip Henika
a resident of San Ramon
on Dec 6, 2018 at 7:14 am

IMO, the Democrats message was loud and clear. Democrats campaigned and won with health care and careers as the conversations brought to the suburbs and the rural areas. I thought the Democrats stayed consistant on the protection of the Mueller investigation. Correct me if I am wrong about these talking points: there is always a generation gap, the current generation gap is based on science and technology, career opportunities grow with the growth of low carbon economy i.e. green jobs and careers and green starts locally and directs self-sufficiency - Americans become producers and consumers of renewable energy and sustainability. Who is going pay for it? The energy source markets are shifting from oil/gas to renewables. The investment might come from the 1% - those who know how to play the game. Or the House Dems could tax the wealhy at 70%. Or House Dems could impound money from convicted money launderers and tax evaders and transfer their wealth to the US Treasury. The question is - why not big money for America’s physical, mental and environmental health?


Report Objectionable Content
Email Town Square Moderator
5 people like this
Posted by Sandy Piderit
a resident of Amador Valley High School
on Dec 6, 2018 at 8:14 am

Sandy Piderit is a registered user.


Swalwell is NOT proposing debt forgiveness for all students -- not even for most.

So students in affluent families that can afford all college costs without loans, that can protect their college students from the need to work, and encourage their students to work on Wall Street or for a consulting form or something -- they wouldn't be eligible.

But a student who works during college, and chooses to work for a nonprofit or teaching school in a community in need rather than in a suburb like Pleasanton -- that student would be eligible for debt forgiveness after a certain number of years.

“I would also hold these institutions more accountable.”

This is crucial -- and I say this as a professor at a private university. Which incoming students are awarded scholarships? It should not be just the ones with super high SAT scores. How about students who will be the first generation in their family to attend college? They should get scholarships first, and should NOT be required to do work/study jobs in their first two years.

And for-profit universities that get students $50,000 or $100,000 into debt, but can't show that their students graduate on time and get good jobs when they leave -- they should be shut down. There's no way that Betsy DeVos will take the lead on this one...but a Democratic House of Representatives could shame her into investigating those for-profit schools.

Report Objectionable Content
Email Town Square Moderator
2 people like this
Posted by Pleasanton Parent
a resident of Pleasanton Meadows
on Dec 6, 2018 at 8:12 pm

Id love to see swalwell propose an education tax funded by political campaign funds/pacs to help contribute to his vision. If you believe in it, help pay for it.

Repairing a Disagreement with your Beloved & “Physical” vs. “Social” Distancing
By Chandrama Anderson | 0 comments | 926 views