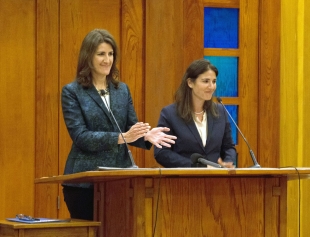 More than 125 community members crowded into the sanctuary at Congregation Beth Emek in Pleasanton, which co-hosted the event, to listen to the two espouse their views on a slew of topics confronting California -- and specifically, District 16, which includes the Tri-Valley, Walnut Creek and Lamorinda.

The congregation’s Rabbi Laurence Milder thanked volunteers, the Pleasanton Weekly and the candidates themselves for making the event possible.

“For Jews, participation in the civic welfare of the community is a sacred duty, and enabling our community to be better educated about issues, and about candidates for public office, is an expression of our deepest values,” he said.

Republican incumbent Baker, an attorney by trade from Dublin, was first elected to the Assembly in 2014 and won re-election two years later in 2016.

Democratic challenger Bauer-Kahan, an environmental attorney and law professor, has no prior elected experience but has spent time serving as a school volunteer and supporting nonprofits. She lives in Orinda.

Assemblywoman Baker was the highest vote-getter in the June primary election, receiving 56.6% of the total votes, with Bauer-Kahan at 43.4%. As the only two candidates, they both automatically advanced to the November election.

In their introductory statements Sunday night, Bauer-Kahan highlighted how her family history has driven her to run, while Baker pointed to her own political successes as a two-term assemblywoman.

Bauer-Kahan opened first, speaking of how, after her great-grandfather was taken to a Nazi concentration camp in 1930s Vienna, her great-grandmother wrote a letter to a stranger in the U.S. asking them to sponsor her family, and save the life of her only daughter.

“I’m standing here today because a stranger said yes to my family and allowed us to come to this country and survive and thrive,” Bauer-Kahan said.

She said that this had given her a sense of purpose and a desire to serve her community, pointing to instances in which she had represented an innocent man on death row, along with coordinating the legal response at San Francisco International Airport in 2017 after the Trump administration enacted a travel ban against citizens from some Muslim-majority countries.

Baker in her self-introduction said she was running for her family and community, and pointed to legislative victories she had achieved in the State Assembly, such as co-authoring a bill ensuring that the University of California system does not prioritize out-of-state students for admission, along with an upcoming BART parking lot project in Dublin. She especially spotlighted her bipartisan record, and ability to reach across the aisle politically.

“When I ran in 2014 and again for re-election in 2016, I said, ‘I want to be the type of leader who reaches across the aisle, will listen to any good idea, and work very, very hard for the best policy, whether it’s inside the party lines or not,'” Baker said. “And that’s been my approach from the start.”

Overall, the hour-long forum remained civil, with some levity arising from the two candidates forgetting to remain standing for their turn to respond -- however, the forum was not without targeted political jabs from both sides.

Baker criticized endorsements that Bauer-Kahan was touting, in particular from the Sierra Club and California Teachers Association.

“Be very wary when you hear about, different groups have endorsed one side or the other, especially from Sacramento,” Baker said. “The way they get those endorsements is those written questionnaires, and it's very important to ask to see those answers if you want to vote for that candidate.” She added that she refuses to fill out any such questionnaires, which is one reason “the Sierra Club will never endorse me."

And Bauer-Kahan targeted Baker's voting record, saying she wasn’t there on crucial issues “100% of the time.”

Questions crafted by co-moderators Gina Channell and Jeremy Walsh from the Weekly or submitted by residents in the audience Sunday night ran the gamut, from transit to gun control to the state's unfunded pension liabilities crisis.

One of the earliest questions posed was on traffic congestion and the candidates' perspectives on Proposition 6, which seeks to repeal the recently passed gas tax.

“There are a lot of projects coming out of (Senate Bill 1) that our communities count on ... We don't want these projects that are now underway to continue to get our off communities out of traffic, into their homes, and off the roads so that we're not idling and hurting the environment,” Bauer-Kahan said. “And so I think it's crucial that we have the resources to do so.”

Baker, though, supports the repeal, saying she had opposed SB1. “Not because it's a tax, because taxes and fees are how we pay for our roads, our bridges and what we do,” she said. “I just happen to believe that before the state takes a single penny more from your wallet, it has to make sure it's doing everything it can -- it's not going to be perfect -- everything it can to spend the dollars it's already getting wisely, and SB1 completely failed to do that.”

They were united in their opposition to Assembly Bill 2923, which would allow BART to construct transit-oriented developments near their stations, potentially circumventing local jurisdiction.

“It is unconstitutional,” Baker said. “There's a reason why our state constitution says local cities and counties are the exclusive ones to decide about housing. Because we live there, and we can have a better feedback with our local city councils, we understand the water infrastructure, the roads, the schools and what we should have.”

However, Baker criticized Bauer-Kahan for having received donations from a sponsor of the bill. In response, Bauer-Kahan defended her own position, adding that being a colleague of the Democrats trying to pass through AB 2923 was not a bad thing.

“I oppose it and will happily tell the people who have supported me that,” she said. “But I think it's important that we have someone at the table to advocate for that. I did have a conversation with the people that she mentioned about it, and I think it's important that we're able to be in relationship with people who differ on opinions and we can talk to them about the importance of what's happening in our community and make sure that our community's needs are addressed in that bill.”

They differed too when asked if they would be willing to change current education policy that allows public school teachers to achieve tenure status after two years on the job.

Baker said she supports teacher tenure reform, and that ineffective teachers should not be allowed to stay on.

“It was one of the reasons I ran for State Assembly,” she said. “I was seeing great teachers who were not getting rewarded and I was seeing ones that had tenure, who were getting the thumbs up or thumbs down evaluation once every two to five years. And there was nothing the principal could do if they knew it was time to re-train or leave the classroom.”

She noted that legislation to change existing policy -- some of which she herself had authored -- had died in Sacramento due to CTA opposition, and underlined once more the support her opponent had received from the association.

Bauer-Kahan did not directly answer the tenure component of the question, though she agreed that it should be easier to remove teachers who are not performing adequately in the classroom. She countered, however, that as a law professor she understood that unhappy students are an inevitable part of the teaching profession, and worried about angry parents forcing out teachers without cause.

“We need to make sure that not only do our teachers have the ability to be there only when they're good, but that we also don't have an angry parent shoving them out of the classroom, and allow them to have academic freedom,” she said. “The ability to speak. I'm not shy about the fact that I'm supported by workers, I'm not going to Sacramento to support the special interests.”

I support Baker for re-election. She has served us well on a bipartisan basis and should continue representing our didtrict using her strong working relationships at the State Capitol. The last thing we need is another inexperienced candidate having no connections, with strong ties to a big union and an environmental group who is out of touch with the challenges of balancing environment, housing and adequate transportation ( I have an environmental sciences degree).

So impressed with Rebecca Bauer-Kahan! Like Pamela says, Catherine Baker does have connections--but with many folks acting against humane immigration polices, community college equity, and the usual suspects in the fossil fuel industry. And yes, her voting record reflects this.

Repairing a Disagreement with your Beloved & “Physical” vs. “Social” Distancing
By Chandrama Anderson | 2 comments | 2,536 views

Get fact-based reporting on the COVID-19 crisis sent to your inbox daily.