Alameda County officials want to build a multi-story parking garage on this vacant parcel of county land east of the oft-filled BART-owned garage at the Dublin-Pleasanton station. (Photo by Jeremy Walsh) 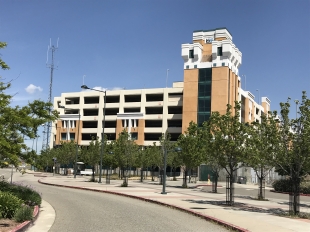 This seven-story garage towering over the Dublin-Pleasanton station barely scratches the surface of the parking demand, according to local and regional leaders who want to bring a second garage to the Dublin side of the station. (Photo by Jeremy Walsh)

Can the system deliver more trains to keep up with the new riders when the parking spaces fill up?

It's not Tokyo yet. But on some days it is close.

The real issue isn't parking. It is about fitting more trains through that bay tube than currently fit.

This is an example of great work by the local Government teams; congratulations.

"The proposal calls for a convertible structure, which means it could be redesigned for housing or office space if the parking space isn't needed down the line"

On the other hand how anyone in right mind thinks that "the parking space isn't needed down the line". I hope this is not example of over-engineering the problem.


Report Objectionable Content
Email Town Square Moderator
10 people like this
Posted by Bart Rider
a resident of San Ramon
on May 2, 2018 at 10:11 am

Wow, this is really good news for folks that rely on Bart. Bart is such an inept organization it's sometimes unbelievable what you see and hear about them, but unfortunately it is all true. They really need to ramp up the number of train intervals leaving Dublin/Pleasanton. The 15 minute schedule has long been unfeasible, 8 car trains, what a joke. They stand poor interns armed with clipboards within the riders to gain information. What for? none of it has been put to use in the 15 years I've been riding Bart from the Dublin/Pleasanton station. Now I just pray for a local job so I no longer have to deal with the overcrowding zoo atmosphere. Thank you to the people that are making this happen!!

Great news. More parking is needed at the East Dublin/Pleasanton (Stoneridge Mall) as well to distribute the traffic and accessibility to the freeway

Report Objectionable Content
Email Town Square Moderator
2 people like this
Posted by Naritai
a resident of Pleasanton Heights
on May 3, 2018 at 1:32 pm

mg
I agree that it's not likely the need for driving will ever subside, but maybe once Livermore BART is open, we won't need so many spots? That's the only feasible scenario I can imagine.

mg and Naritai -
Pleasanton City Council is planning to approve more and more housing "down the line." There will likely never be a decreased need for parking at East Pleasanton BART - in our lifetime. Yes mg, this IS a wasted effort and dollars of over-engineering for the "convertible" option. Just build a darn parking garage already!

Report Objectionable Content
Email Town Square Moderator
1 person likes this
Posted by Map
a resident of Del Prado
on May 14, 2018 at 9:07 am

How many people out there really believe that if that parking garage is built that somewhere in the near future it wouldn’t be converted into commercial and/or residential space ?? Build it with our tax dollars then flip it to a hungry developer with promises of replacement parking somewhere down the line. Over engineered[removed] it’s all in the plan, wait and see, can’t trust anything that has to do with Bart and the county.