San Ramon resident Jen Runyan spent two weeks aboard the Nautilus this past fall as part of her year-long Science Communications Fellowship. (Photo by OET/NautilusLive) 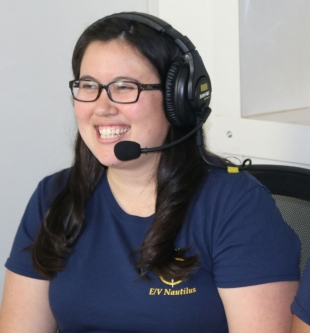 While on-board the Nautilus, Runyan communicated with classrooms and marine enthusiasts all around the world, explaining the science behind the live-streaming imagery from the ship. (Photo by OET/NautilusLive)

Jen Runyan missed studying the ocean. She had her fill of the life sciences in her position as a museum educator at the Lawrence Hall of Science, but the science center nestled in the Berkeley hills didn't offer so many opportunities for marine biology, her focus in school.

"My current position I have at the Lawrence Hall of Science is more STEM-related," she said. "Which is great, but I was definitely missing that marine portion."

So when the opportunity came for her to join the exploration team on the USS Nautilus, the San Ramon resident jumped on-board.

The Nautilus sails every year as part of the ocean-exploration mission of the Ocean Exploration Trust, a nonprofit established in 2008 by Dr. Robert Ballard, an oceanographer most renowned for discovering the RMS Titanic in the '80s. Their expeditions have taken scientists from the Aegean Sea to the Caribbean and, for the past three years, to the waters of the Eastern Pacific.

As part of their mission, the organization sponsors a year-long Science Communications Fellowship program, for educators to serve as a sort of liaison between the Nautilus' scientific work and the ship's global audience. Last year, the fellows took turns aboard the Nautilus in two-week stints from May to November, as the ship traveled from British Columbia, Canada to Baja California, Mexico.

And this was Runyan's job.

She was officially accepted to the program in early 2017, and was able to participate while continuing her work at the Lawrence Hall of Science. As a fellow, she has given talks at schools, prepared curriculum and organized scientific seminars.

But the real heart of the program was her two weeks aboard the Nautilus.

"What my role is on the ship, is to be able to help communicate and facilitate a lot of discussion that was amongst all of us," Runyan said.

She was on-board for two separate expeditions, each lasting a week. Both took place in the Gulf of California: the first, from Oct. 20-27, centered on the North Guaymas Basin and the second, from Oct. 30 to Nov. 5 in Pescadero Basin.

Hydrothermal vents -- which also happened to be discovered by Ballard, back in 1977 -- occur at underwater fissures in the ocean crust, when seawater meets magma, according to the National Oceanic and Atmospheric Administration (NOAA).

The seawater in these vents can reach temperatures of over 700 degrees Fahrenheit, according to NOAA, but doesn't boil because of the extreme pressure at the depths where they form -- the vents studied during Runyan's first expedition were about 1,800 meters underwater, she said.

And these warm waters give rise to a whole host of organisms and geologic compositions, despite being cut off from sunshine.

As a fairly recent discovery, there's still much to be studied about the phenomena, Runyan said.

Because the San Andreas Fault runs directly through the Gulf of California, it's an area that is particularly rife with hydrothermic vents, Runyan said.

Considering the incredible depths of these vents, the bulk of their research was conducted by remote operating vehicles, which collected a variety of specimens for their study. Many of the samples were gathered by a group of Mexican graduate students also aboard the ship, who had partnered with the trust for the research.

There were multiple aspects to the communications fellowship, Runyan said, but one of the most memorable ones was to answer questions from people around the globe, to explain the science behind the research to classrooms and ocean enthusiasts who had tuned in to the ship's livestream.

"I think we had on average about 12 different countries that were listening in, so that was really neat to be able to get questions from around the world, being able to answer them," she said.

"And then also getting a chance to talk to different classrooms, at least from all across the U.S., was very interesting," she added. "We couldn't see them, but they could see us, and it was just fun being able to answer a lot of questions that kids might have had about deep sea exploration."

One of her favorite parts of the journey was the collaborative nature of their work.

But after she landed, her work was not over -- the fellowship officially concluded last month. She's been sharing her experiences with students of all ages throughout the Bay Area, from high school students in Marin to a friend's kindergarten class in San Francisco.

And even though she may have finished up the fellowship, it will continue to be a part of her life, she said.

"You're part of this larger alumni organization, and so you can tap into the resources, you can work with potential future Science Communications Fellows to make different events happen, to support them in a variety of ways. You still will be able to continue expounding on the mission of Ocean Exploration Trust."

What an incredible experience to have. It sounds fascinating. Will you be speaking at any other places besides schools?

The first few seconds after awakening; before I remember the virus
By Chandrama Anderson | 0 comments | 3,632 views

Be aware of hyperbole in numbers and media hype
By Tim Hunt | 14 comments | 1,576 views