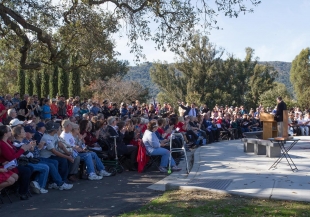 6 people like this
Posted by Jeff
a resident of Another Pleasanton neighborhood
on Nov 17, 2016 at 8:20 am

Kudos to all those involved in creating this veterans memorial and improvements to the cemetery. This is something we can all be proud of. However, I fear that some of those responsible for overseeing the cemetery are being overly zealous in implementing new strict rules. For example, recently city workers confiscated flowers that were left at grave-sites by loved ones, because apparently the flower holders were not the right shape. There is also a bench donated by a grieving mother of a son who is buried there. It is now supposed to be torn out because it doesn't match someone's vision of what all the cemetery's benches should look like. This is sad. It dishonors those buried there by dishonoring the grieving relatives. And for what?

When these ideas do come to life, you will need iron gates that get locked each night, especially having a sign posted out front inviting people in. In our ever changing world, sadly there are those who would love nothing more than a new place to abuse.