Uploaded: Sep 13, 2022
Johnny Foster, the fourth director of Lawrence Livermore National Laboratory, has learned quite a bit during his 75 years in and about the United States’ national defense agencies.
Speaking to more than 200 people who gathered to celebrate the lab’s 70th anniversary last Thursday, he shared how he and Edward Teller convinced the Reagan Administration to pursue the Strategic Defense Initiative. Foster said that officials were concerned about developing a better ballistic defense capability. And Teller protégée Lowell Wood had a plan for such a program. Teller inquired about whether a congressional subcommittee was open to hearing the idea and they were. Teller made a few opening remarks and then turned the explanation over to Wood. The committee was asked if they president should see it and they said yes. 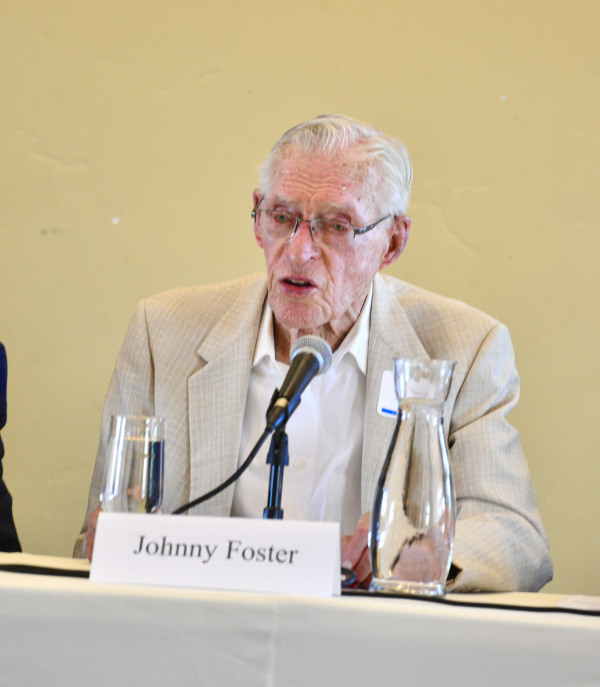 Foster sat on an advisory committee that was meeting the next day. When he interrupted the meeting, President Reagan asked him what he wanted and he shared the outline from Teller and Wood. The president read it and nodded yes. Within a week, he asked the Sec. of Defense for a detailed plan and that’s how the initiative got approved in Washington D.C. in two days, Foster explained.
In his earlier remarks, Foster shared how lab co-founder Ernest Orlando Lawrence imprinted his stamp onto the culture he wanted on the lab. A number of the directors remarked on how that culture has carried through for 70 years and resulted in the lab providing the nation with cutting edge defensive capabilities and other technologies. Foster noted that Lawrence helped shepherd him through his PhD. Lawrence’s leadership, persuasion, judgment and vision were imprinted on the lab’s staff.
“I credit those early days at Berkeley (national lab) and Lawrence Livermore with shaping whatever skills I took forward. For that, I am eternally grateful,” he said. “He (Lawrence) would walk around at night talking to individuals about their work, their issues and solving problems.”
Director Kim Budil, picking up on George Miller’s comments, said as the lab enters its 8th decade, it must move with urgency on its mission and say relevant. That involves deciding what are the biggest and most challenging issues that the lab can tackle for the country. She cited how the computing capability was applied to developing therapeutic drugs and the time has shrunk to where she could see it happening in days or weeks.
One aside, you remember last week was quite hot—hitting 110 degrees in Livermore on Thursday. That temperature resonated with at least two speakers who remembered milestones that took place in those temps.
Watching the gathering I was struck by their longevity of the directors. Kim Budil, the current director, is only the 13th in the 70-year history.
Topping the list was Foster, who turns 100 Sept. 18 and led the lab from 1961 to 1965. He was followed by Michael May from 1965-1971. May, who appeared by video at the event, turns 95 this year. John Nuckolls is 92 and Bruce Tarter is 83. George Miller will be 77 while Michael Anastasio is 74. Lab co-founder and director emeritus Edward Teller passed at 95, while Harold Brown, the second director and later Secretary of Defense, passed at 91.
The Livermore Lab Foundation presented the event and will be posting a video on its website this week. If you have an interest in the lab, it’s well worth your time to watch it. I’ve been involved with news around the lab for about 40 years and sat focused for two hours of the panel.

For more on the panel, please see my article on the Weekly's home page.

Rich Buckley is a registered user.

There are both good medical and biological uses on positive end of scale spectrum all the way to catastrophic weaponry beyond imagination.

Report Objectionable Content
Posted by Rich Buckley, a resident of Livermore,
on Sep 13, 2022 at 9:53 am
Rich Buckley is a registered user.

This good man Gorbacjev can also be viewed through an entirely different lens, too human to lead an evil empire, to the man molded in Russia as the perfect innocent candidate to send to the US to learn and report back to Russia, what, if anything, Americans may know about scalar weapons.

Some of these weapon systems were used on the US Embassy just to see how we might respond. The particular energy frequency caused a large segment of our Embassy staff to all become ill, some died. No US response meant we were ignorant. On the other hand US Counter measures would mean we knew about the science.

The positive takeaway from this is there are groups today working to learn all they can about specific energy frequencies that heal living tissue. Our data base for healing is not large enough yet to deliver the science fiction med-bed. The trick will be to cause as little disruption as possible to pharmaceutical companies, doctors, and the healthcare industry.

The future of homework
By Monith Ilavarasan | 0 comments | 1,021 views