“We struggle to process and make sense of the situation in Ukraine. Images of bombed apartment buildings, civilians dead on the side of the road and long lines of people fleeing their home haunt our thoughts. We feel drawn to do more than watch…”

Pleasanton’s Bryan Gillette posted this March 29 as he shared his family’s plans to help refugees from war-torn Ukraine and a plea for help funding supplies and other necessities.

Bryan and Audrey Gillette and their sons, 15-year-old Colin and 13-year-old Decker, took only two hours to make the decision to travel halfway around the world to help the Ukrainian people – those Ukrainians fighting Russian forces and those fleeing the besieged country.

Picking up and traveling thousands of miles “ isn't out of our character,” Bryan said.

The “Traveling Alphabet” – self-named because they are A(udrey), B(ryan), C(olin) and D(ecker) – is all about meeting and connecting with new people. In 2017, Audrey and Bryan took Colin and Decker out of school for a year to travel the world.

They knew traveling to Germany and Poland to assist refugees was not going to be a pleasure trip. Flexibility was needed because there was no set step one, step two and step three. But there was no doubt it was going to be ABCD.

“I think we knew what we were going to do was going to be impactful,” Audrey said, “not just for other people but for us as well. I don’t think it ever crossed our minds to not take the kids. Either all four of us were going or we weren’t going. We operate as a family that way.”

Through GoFundMe donations, the Pleasanton family raised more than $57,000 to provide relief to Ukrainian refugees in Poland and Germany. They left for Berlin April 10, with the boys’ teachers at Amador Valley High School and Harvest Park Middle School excusing work that wasn’t absolutely necessary.

Initially the fundraising goal was $10,000, which Audrey and Bryan planned to use to rent two vans and buy medical supplies in Berlin, travel 10 hours to the Ukrainian border to deliver those supplies to refugee camps and bring Ukrainian people back to Berlin. The boys would be their parents’ navigators.

However, plans changed – in part because of conditions at the border and in part because the donation goal was met by the end of the first day and continued to grow exponentially. 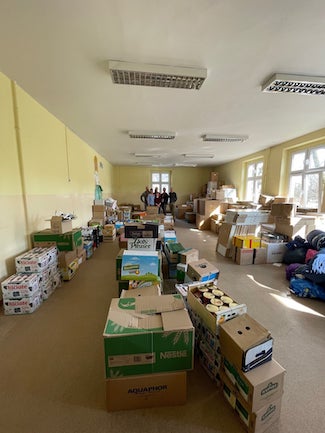 “The support from this community blew me out of the water,” Bryan said.

Because they knew they would need more than just financial help, as soon as the decision to go was made, Audrey “put it out to the universe” by sending an email to everyone in her contact list.

Audrey was contacted by a former Pleasanton Police Department employee who said a current PPD officer, Mia Sarasua, was volunteering at the Ukrainian border. Sarasua put the Gillettes in touch with Sergey Karachenet, a Ukrainian-born EMT from Minnesota, who was also volunteering. Sergey spent 50 hours transporting the $10,000 of medicine purchased with the donations from Germany to Kyiv.
Much-needed tourniquets, costing $7,000 for 442, are making their way to Kyiv right now. 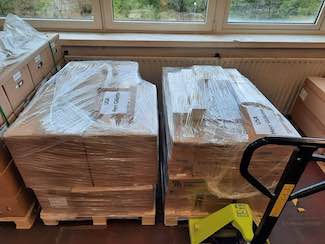 “I didn't realize how much a tourniquet cost. But then if you need one, that cost doesn't matter as it likely just saved your life.” Bryan wrote in a FB post.
Several thousand dollars were used to purchase household supplies, food, clothing, toys and medicine for a refugee center in Swidnica, Poland, a city that has taken in more than 2,700 Ukrainian refugees.

Everything was bought in the town because the Gillettes thought it was important to bolster the local economy. Store owners in Swidnica were so excited to see ABCD because, until they saw them in the flesh, the people of Swidnica considered the Gillettes the “mythical American family,” according to their host, who explained how they could not understand why a family would travel so far to spend money in a Polish town. Audrey said the host explained, “they’re thrilled you actually exist.”

“We saw there was a need and we heard they (the people in Swidnica) were doing something to help and we wanted to support them,” Audrey said of the town. “And we could,” Bryan followed.

“One of the surprise outcomes for me was realizing not only what we brought to the table for the refugees, but the hope we gave to our contacts in Poland, that there were people out there who were willing to come alongside them and support them,” Audrey said.

ABCD was also able to outfit 10 Ukrainian children living in Berlin with Chromebooks and headsets so they could attend school online with teachers who are still in Ukraine.

“These teachers, I don’t know where they are. In bomb shelters? In their homes?” Audrey questioned. “I don’t know how they still have wifi.”

“It sort of speaks to the tenacity of the people there, trying to maintain some sort of normalcy.”

There is an orphanage in Swidnica, and ABCD asked for a list of items they could bring when they visited.

The “children’s home” is in a building that previously served as a reform school, and the gates, barbed wire and bars make it look less than inviting, Audrey said. Some of these children living there were left at the border, and their names and the identities of their parents are not known.

The inside of the home is far more comfortable than the austere exterior, with carpeted rooms and soft pillows and stuffed animals on the beds, but the children there are not and have not been living a “normal” life.

Knowing a sense of normalcy is so important to mental health and wellbeing, the family indulged the children with some list items that were more “want” than “need,” like towels and swimsuits and cosmetics for two older girls. 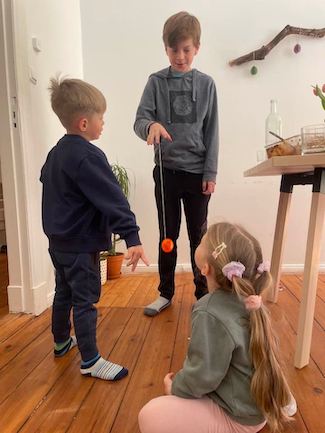 “You try to put yourself in their shoes, which is a very difficult thing to even comprehend,” Audrey said. “They had good lives in Ukraine. They were probably living in a comfortable home, they had jobs and the children were in school. They had what they needed – clothes, food, whatever.

“And now their world has been turned upside down and they are forced to rely on the kindness of strangers,” adding that nobody knows how long this will continue.

Like most, Bryan and Audrey are not expecting the war to end anytime soon. Bryan noted that May 9 is “Victory Day” in Russia, a holiday (somewhat ironically) commemorating the victory over Nazi Germany in 1945. There is concern the holiday might spark an escalation in fighting in Ukraine.

Looking ahead, the Gillette family hopes to provide 17 Chromebooks and wardrobe armoires for clothing and storage for the orphanage, as well as supplies to the Swidnica refugee center. They are also considering purchasing more medicine to be sent to Kyiv.

That is why the GoFundMe account is still accepting donations.

Bryan said there were a number of people here who wanted to help but didn’t know how and didn’t want to send money to a large organization. They knew, though, that donating to the Traveling Alphabet would get that money into the hands of the people in need.

“They said ‘thank you so much’. I feel a little bit odd because I feel like we were the lucky ones that got to go,” Bryan said. “We would love to find another family to do this, to take the torch,” he continued.

keeknlinda is a registered user.


It leaves me simply bursting with pride that I am able to say I actually know Bryan, and by extension, his remarkable family. Their family values and sense of humanity are what storybooks are made of. And they are right here in Pleasanton, members of our community who recognize and are teaching their youngsters the meaning of contributing for the good of those who are less fortunate.
Thank you ABCD, for showing us all there is a world beyond the soccer field, that we are a part of it, and we all can do good things. I am beyond honored to call you my friend.

Master’s in Media Studies and Communications: Five Questions to Ask Yourself
By Elizabeth LaScala | 0 comments | 1,101 views

Made in home
By Monith Ilavarasan | 0 comments | 786 views