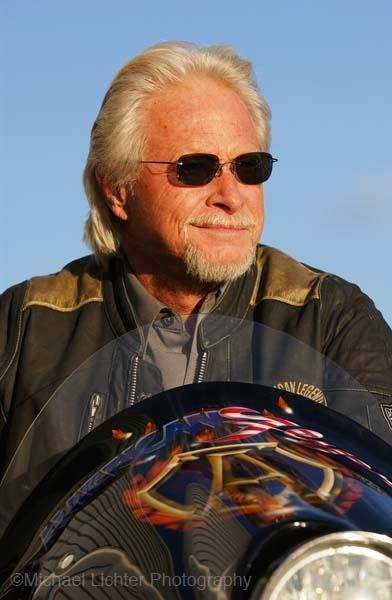 Arlen Ness (pictured in this photo by Michael Lichter), an American motorcycle designer and entrepreneur best known for his custom motorcycles and related motorcycle supplies sold at his agency in Dublin, died in his home March 22, surrounded by his wife of 59 years, Beverly, and his family. He was 79.

Mr. Ness received acclaim for his designs, most of which are noted for their unique body style and paintwork.

He was born in Moorhead, Minn. on July 12, 1939 to Elaine and Ervin Ness, and moved to San Leandro when he was in the sixth grade. After high school, he worked as a pin setter at a local bowling alley and later as a postal worker and furniture mover.
His first customs, including work on a 1947 Harley-Davidson Knucklehead, were made in the garage of his home in San Leandro. By the early 1970s, he had moved to a storefront on East 14th Street.

Ness was recognized for his unique painting style and for developing a line of custom motorcycle parts. His popularity grew as he built new custom bikes and then had those displayed on the bike show circuit and featured in motorcycle magazines.

After more than three decades of custom bike building, his business, Arlen Ness Motorcycles, moved into a spacious building at 6050 Dublin Blvd., in Dublin. The company is also an authorized dealership for Victory Motorcycles and for Indian Motorcycles.

In addition to a showroom and sales operation, the facility includes a museum featuring more than 40 of Mr. Ness’ custom motorcycles. These include his Untouchable, the twin motor Two Bad, the antique inspired Ness-Tique, Blower Bike, the Italian sports car inspired Ferrari Bike, the '57 Chevy inspired Ness-Stalgia, the Bugatti-like Smooth-Ness and the Discovery Channel's Biker Build-Off bike Top Banana.

Also on display is his jet-powered Mach Ness which incorporates a jet-powered helicopter engine as its power plant. He built the Mach Ness in 2005 after seeing Jay Leno's turbine-powered bike.

In a Facebook post by Arlen Ness Motorcycles announcing its founder’s death, Ness was quoted saying: “Motorcycling has been a great ride…my whole life since I’ve been motorcycling has been wonderful. I’ve met so many nice people. Friends all over the world…. We can go almost anyplace and stay with friends. It’s been great.”

The family said a memorial service and celebration of life will be held at a later date.

A very gifted man...Rest In Peace.


Arlen will be missed for generations too come . Setting the bar with the likes of Indian Larry for future bike builders . Craftsmanship is going out off style and Arlen never let that happen . He will be dearly missed and so will his craft .


I have been seeking information on this topic for the past few hours and found your post to be well written and has solid information. Thank you!
https://chinesewuxia.world