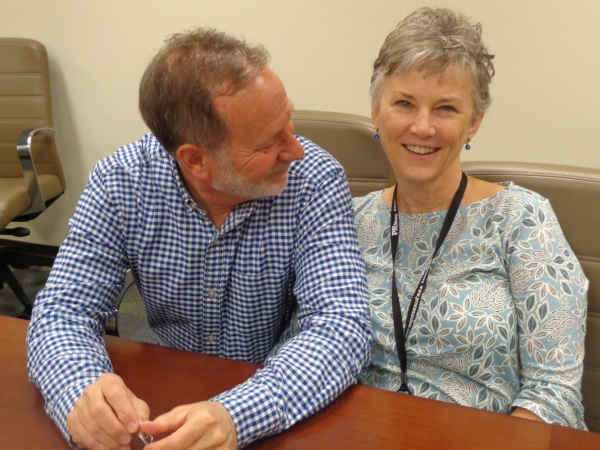 David Nagler, who stepped down last month as chairman of the Pleasanton Planning Commission, and his wife, Tracy Dunne (both pictured above), the city’s former public information officer, are moving to Carmichael, a suburb in the greater Sacramento area where they still own their home.

They moved to Pleasanton 12 years ago from Sacramento, where Nagler was a lobbyist to numerous statewide organizations and companies before joining Audentes Therapeutics, Inc., a San Francisco-based biotechnology company. He has been the firm’s senior vice president of Human Resources and Corporate Affairs.

Dunne moved with her family to Carmichael from Michigan while in high school. She earned a Master’s degree from Sacramento State, taught for a while and then took a job as a legislative researcher with a Sacramento lobbying law firm, where she met David Nagler.

Later, she served as a communications specialist with state agencies and the State Assembly before being named director of communications for former Gov. Gray Davis.
While Dunne parlayed her years in government communications to gain the city’s public relations post in Pleasanton, Nagler found the time from his corporate responsibilities to fill a vacancy on the city’s planning commission.

He did this, he said, because from his very upbringing, he learned to appreciate community and public service. His mother was the first woman to be elected to the board of trustees of the San Mateo school district. Nagler remembers walking neighborhoods as she sought voter support.

Later, as president of the school board, she led the campaign for school busing to better integrate public schools – enduring a bitter community fight that Nagler said gave him the “backbone” to serve on the sometimes similarly contentious Pleasanton Planning Commission.

“So, when I was growing up, I just naturally gravitated toward public service, and here I am,” Nagler said.

Nagler is known for sitting quietly, head in hands, as petitioners state their cases before the Pleasanton Planning Commission, whether to add a second floor to their home or open an outdoor pre-school in a quiet residential neighborhood.

“I used my corporate experience to figure out what was the key issue before the commission,” Nagler said. “I didn’t allow myself to be influenced by the emotions in the room or what people were claiming to be true, but may not have been.”

“I also didn’t let a packed hall sway my decision because the people who showed up at a public hearing often were the most involved in the issue, the most emotional and the most opinionated,” he added.

Still, Nagler listened to these speakers because, he explained, they also tended to be the most informed on the issues. It was just his job as an appointed planning commissioner to apply his best thinking to deciding what the public policy should be and what would be best for the “breadth” of the community.

Nagler liked the independent thinking that came with service at the local government level, where partisan politics is not allowed.

He also believes the Brown Act serves local government well by requiring that meetings of three or more on a five-member board be noticed and held in public. The law has ended so-called back room deals.

While Nagler leaves behind a legacy of a deep-thinking, fair-minded planning commissioner, Dunne’s departure leaves a void in a city communications effort she has successfully led, serving as a spokeswoman for Pleasanton with hundreds of press releases, colorful publications, newsletters and photos.
They’ll both will be remembered…and missed.