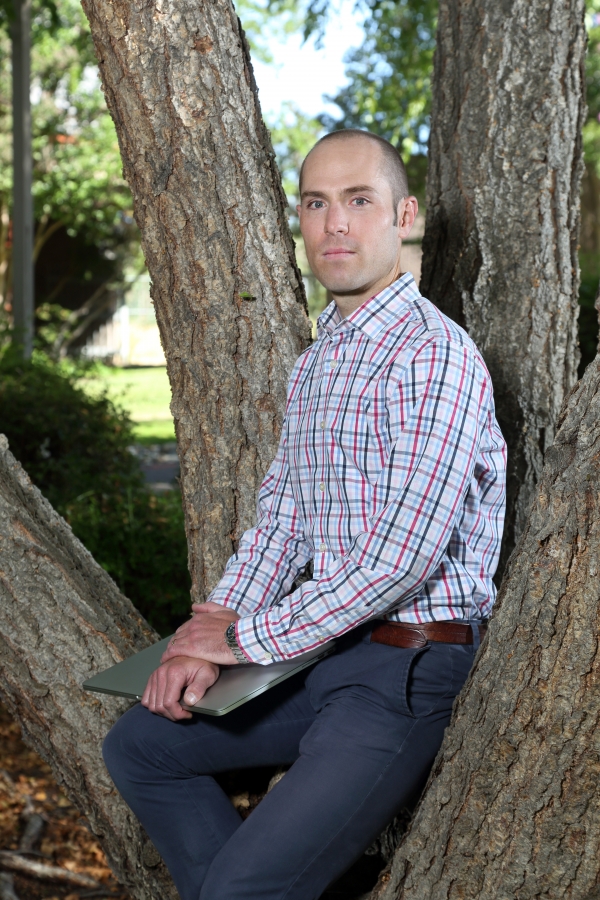 Sandia National Laboratories researcher Brandon Heimer (pictured in photo by Dino Vournas) has been named one of the country’s top young engineers for “exceptional engineering research and technical work in a variety of disciplines.”

Heimer, who lives in downtown Livermore, was among 84 “top notch” engineers ages 30 to 45 honored last week at the National Academy of Engineering’s 24th annual U.S. Frontiers of Engineering symposium, held at the Massachusetts Institute of Technology’s (MIT) Lincoln Laboratory. The laboratory occupies 75 acres in Lexington, Mass.

Sandia spokesman Michael Padilla said participants recognized for their engineering achievements came from industry, academia and government. They were nominated by fellow engineers or organizations.

“It’s a great honor to be recognized by my engineering mentors and to stand alongside such accomplished peers,” Heimer said. “I’ve had the privilege of working with four NAE members during my undergraduate and graduate education. They inspired me to make an impact on the world with my research, and I intend to use this opportunity as encouragement to continue that pursuit.”

Padilla said Heimer’s expertise was noted in his graduate thesis research where he engineered a biosensor and a protein to detect a specific epigenetic mark (DNA methylation) that predicted a patient’s responsiveness to cancer therapeutics.

Padilla also said that Heimer intends to draw on the experiences and discussions at the NAE symposium at Sandia to inspire greater research and development in theranostics at Sandia.

“This research will help provide physicians with tools to diagnose and treat disease potentially for warfighters serving in areas at high risk for infectious disease,” Heimer said.

Heimer serves as an internal advisory board member for NanoCRISPR, a laboratory-directed R&D project that seeks to deliver CRISPR — the technique that makes it possible to alter DNA within cells — as a therapy to combat infectious disease.

One of Heimer’s earliest projects at Sandia, according to Padilla, involved risk analysis of critical infrastructure for the federal Emergency Management Agency’s National Hurricane program, including efforts now underway as Hurricane Florence barrels toward the East Coast.

Heimer is a senior member of Sandia’s technical staff in research and academic programs. He received his bachelor’s in chemical engineering from the University of Texas at Austin and a doctorate from MIT, where he also studied technological innovation, entrepreneurship and strategic management at the Sloan School of Management.

When Heimer is not spending time in his lab, he enjoys racing triathlons in the Tri-Valley and scuba diving.

Sandia National Laboratories is operated by National Technology and Engineering Solutions of Sandia LLC, a wholly owned subsidiary of Honeywell International Inc., for the U.S. Department of Energy’s National Nuclear Security Administration. Its headquarters are in Albuquerque.

YOU ARE AN AMERICAN HERO! VIVA!