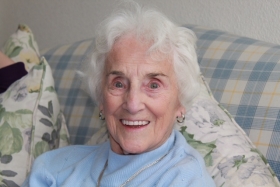 Sheila Evelyn Reid passed quietly on October 25, 2019, she was 94 years old. Sheila was born in 1924 in Edinburgh, Scotland to parents William Charles and Sabina Maria (Duffield) Eves. She was the youngest of 8 children. Sheila married Robert Kennedy Reid in March of 1951, whom she had met while ice skating. Sheila worked as a seamstress in Scotland before relocating to the Unites States. Bob and Sheila arrived in the US in 1963 with their daughter, Lesley. Sheila lived most of her life in Albany, California. There she enjoyed bowling, golf, and creating beautiful handcraft works including blankets, scarves, and clothing. She relocated to Pleasanton, California where she was active in social clubs, played bocce, and enjoyed spending time with her family, especially with her new great-granddaughter. Sheila is survived by her daughter Lesley and son-in-law Frank Napoleon, grandchildren Christin (Napoleon) Clark and Reid Napoleon, and great-granddaughter Kaleigh Clark.