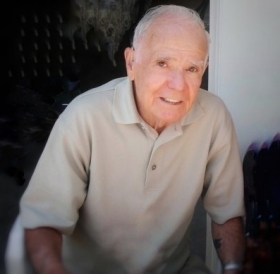 Ross H. Hoblitzell of Pleasanton, Ca passed away April 27,2018 at Stanford/Valley Care in Pleasanton. Mr. Hoblitzell was a native of Wheeling, West Virginia and lived most of his life in Livermore, CA. Ross was Ordained Deacon in the Roman Catholic Church at St. Augustine’s in Pleasanton in March 1978. After his ordination he was assigned to St. Charles Borromeo in Livermore, CA. He served there several years before moving to St. Michaels. he also served in the Diocese at Fresno and later the Diocese of Stockton. He retired from LLNL after 24 years, prior to his retirement he and his late wife Barbara bought the Livermore Mortuary and operated that from 1978 to 1994. Ross is survived by his seven children, Ross Jr of Villaricca, Italy, James of Parkdale Or, Christine of Livermore Ca, Barbara of Baltimore Md, John of Atascadero Ca, Mary of Livermore Ca, Kathi of San Diego Ca. 9 Grandchildren and 1 great Grand Child. A Rosary will be held on Thursday, May 3rd at 8 pm and Mass Friday, May 4th at 10:00 am, both at St. Michaels Catholic Church 458 Maple St, Livermore, CA 94550. Remembrances may be made to the First Tee (https://thefirsttee.org) and Livermore K9 Foundation (https://www.livermorek9.org).