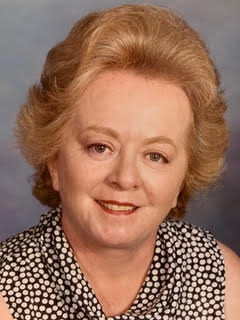 Nancy Pennell, a woman known for her adventurous spirit and generosity, died July 16, 2021, after falling in her Pleasanton home. She had been battling health issues for months. She was 78.

The health challenges were not slowing her down. During a time of tribute at the Pleasanton Rotary Club last Thursday, one member observed Nancy had been at meetings Tuesday, Wednesday and Thursday of that week, including a social event Thursday when she was sipping her signature chardonnay with ice.

Nancy was drawn to Rotary after talking with a Rotarian who discussed the Wheelchair Foundation. That became her passion. She joined the club’s wheelchair committee and traveled several times to distribute wheelchairs in different countries. Her sister, Patty Rabada, said Nancy did not like heat—a challenge in the tropical countries, but went anyway. She said Nancy came home “exhausted and exhilarated.” She also traveled with Rotary medical missions.

Both Rotarians and her fellow golfers commented that you never had to guess what Nancy’s opinion was. The Rotarians said that she routinely took charge and her leadership typically worked out well. During the demotion party to end her service as Rotary club president, one member saluted her as Gen. Nancy Pennell and did a riff on George C. Scott’s famous opening speech in the movie "Patton."

She was known for being generous with both her time and her finances. In addition to her service with Rotary, she also served two years on the Alameda County Grand Jury.

She was born in Jefferson, Iowa, to Thomas Raymond Cuddy and his wife, Elizabeth Barnes Cuddy. They lived in Iowa for a few years before the family moved to San Antonio, TX where she graduated from high school. She attended San Antonio Junior College before embarking on a 20-year career as a flight attendant for Saturn Airlines and Seaboard Airlines that flew military personnel around the world. That included many trips to Viet Nam as well as Berlin and other European destinations.

She moved on and attended Chabot College’s nursing school in Hayward. She worked as a nurse for many years, heading the critical care unit at St. Rose Hospital in Hayward.

In 1983 she married Robert Pennell and they lived in Aptos. They moved to Pleasanton in 1988 where she lived until she passed. They shared an adventurous life together, skiing, enjoying fine dining and traveling widely. After her husband died, she continued to travel including trips to China and Africa.

Nancy was an avid golfer and played weekly with the Pleasanton Women’s Golf Club at the Alameda County Fairgrounds.