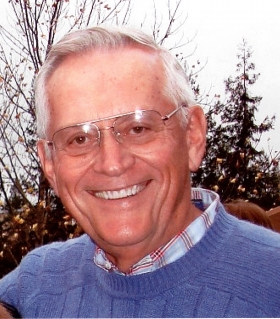 Harry R. Sheppard, a long-time resident of Pleasanton passed away at home surrounded by family on October 19, 2019. He was 82 years old. Harry is survived by his wife, Joanne, son Scott (Samantha) grandchildren, Dylan and Shane Sheppard, Justin Burns and Ashley and Ronnie Recore, niece SueAnn Sheppard, nephew Roger (Tracey) Sheppard and many grand nieces and nephews.

Harry was born on November 5, 1936 in upstate New York son, of Ray and Marge Sheppard brother of Jack (deceased 2008). Harry attended Nott Terrace High School where he picked up his first golf club, which became a lifelong passion. He attended and played basketball at Colgate University where he was elected to Phi Beta Kappa.

After college, Harry served four years on active duty and six years in the reserves with the U.S. Navy and attained the rank of lieutenant commander.

While stationed in Long Beach he met Jackie Skelsey (deceased 2004) and they married in August of 1963. Harry and Jackie had two children Scott and Pamela (deceased 2005). Harry received his law degree from U.C. Hastings Law School in 1965.

He joined the Alameda County’s District Attorney’s office after graduating from law school and later was Partner at Fremont’s Bell, Sheppard & Faria. He founded the Mission Valley Bank Corporation with a group of local investors in the early1980s and served as an organizer and chairman of the bank holding company, which was bought by U.S. Bank in 1996.

Harry was in private practice for 30 years and worked not only as a lawyer but also a defense attorney, civil practitioner, general counsel and entrepreneur.

Harry was appointed to the Alameda County Superior Court by then California Governor Pete Wilson in 1995, later becoming the presiding judge until he retired in 2009.

Harry was honored as the Trial Judge of The Year by the Alameda Contra Costa County Trial Lawyers’ Association in 2004 and was also a recipient of the Alameda County Bar Association Distinguished Service Award. In 2009 Harry joined JAMS, The Resolution Experts.

In 2009 Harry married Joanne Murphy of Gansevoort, New York. They enjoyed ten years of marriage in which time they did extensive traveling and continued to enjoy golf at Castlewood Country Club where Harry was a member for over 40 years with his many friends.

Harry was loved and impacted by many people and will forever be remembered for his kindness, humor and gentle spirit.