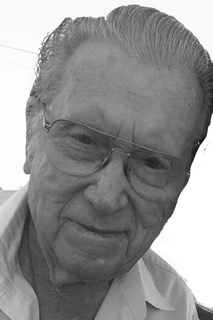 On September 2, 2020 George Curtis Hawley of Livermore passed on to his eternal life in Heaven after 96 years filled with love, faith, and humor. Though his long battle with cancer and COVID precautions made his final months frustrating at times, his devotion to his family and his strong belief in God brought him comfort and peace.

George was born to the late Lydia and Joseph Hawley in Madera, CA. Before he was school age, his family had moved a few times and then settled in San Ramon, CA to manage a walnut and Pear Orchard. George loved to share stories of his childhood on the orchard, his pet duck, and all the mischief he got into over the years. On October 2, 1942 George joined the United States Coast Guard where he spent four years patrolling the California coast during World War II, he was honorably discharged on March 13, 1946. After the war, George went on to Bible school, married his first wife Mary Saponas, and had a variety of different jobs before his long-time career as an insurance adjuster that lasted until he retired in 1990. He went back to a variety of different jobs when retirement bored him, finally fully retiring at 80 years old.

Mary and George did not think they would be able to have children, but after some strange symptoms and a worry she may have gallstones or a tumor, they found that she was in fact pregnant. On January 1, 1964 Mary gave birth to their only son, Michael Earl. George was a strict, but patient and loving father. He enjoyed fishing, camping, and hunting with Michael and later with his grandchildren Michael, Curtis, and Brittany. Mary sadly passed away in 2004 after a long battle with liver disease. George said he would never marry again, but when he reunited with his past love Charlotte Gleason, he quickly changed his mind. George and Charlotte were married in 2005 and had some great adventures before Charlotte fell ill with heart conditions and dementia. George was a devoted and loving husband until Charlotte’s passing in 2018.

George was proceeded in death by Mary and Charlotte, his son Michael Earl, and his grandson Michael Jeffrey. George is survived by his stepchildren, Doris Pruett (Steve), Alice Parker, James Zimmerman, his grandchildren Curtis and Brittany Hawley (Shawn) and Kari Hawley Dubois (John), Joscelyn Godwin, Millicent Mattaliano (John), his great grandchildren Joshua, Norah, Cedar, and Kaia Hawley, Nolan, Keriann, and Asher Dubois, Gracie Chesterman, Angelo and Marisa Mattaliano, and many more loving family and friends. George’s greatest desire in life was to be able guide all of his loved ones toward a personal relationship with Jesus Christ, that he may be reunited with them for eternity.

A viewing will occur at Graham Hitch Mortuary Sunday, September 27, 2020 from 11:30am until 2:30pm; George will be buried at the Chapel of Chimes Cemetery in Hayward, CA on Monday, September 28, 2020. Due to the current COVID pandemic, a Celebration of Life service will be postponed until spring of 2021. The family would like to thank Faith Chapel of Pleasanton, CA as well as Hope Hospice of Dublin for their years of support and love for George and their family. If desired, memorial contributions can be made in George’s name to Faith Chapel Assembly of God, 6656 Alisal Street, Pleasanton, CA 94566.