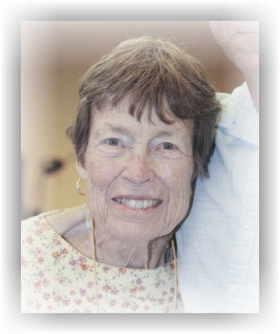 Long time Pleasanton resident, Mary Chilton Potts Barlow, made The Inevitable Transition on January 17, 2018. She was 88 years old. “Chilli”, as she was known to friends and acquaintances, made the transition peacefully and gracefully, surrounded by the love and presence of her children and two generations of family.

Chilli was born in Harlingen, Texas on October 2, 1929 and grew up in south Texas, close to the border with Mexico. Throughout college, she studied Fashion Design but graduated with a degree in Art Education in 1951 from Texas State College for Women and then began an 11 year career teaching elementary school in Fort Worth, Texas, Boulder, Colorado and settling at James Madison School in San Leandro, California. In San Leandro, she met her future husband, Bud, on a blind date at the Purple Girdle. She accepted his marriage proposal and was immediately blessed with stepdaughters Belinda and Vivian. Later, they grew the family even more with the births of Keith and Craig. In 1965, Chilli and the family settled on Alisal Street in Pleasanton.

At the Alisal residence, Chilli raised the family and she raised chickens and geese, selling the eggs to neighbors and church-goers and she tended a garden. She taught cooking and sewing for 4-H. She sewed clothes for herself and her children and she even sewed a teepee for YMCA Indian Guides. She was self-taught on the piano. Later, she took up needlepoint and quilting, making sure that all of her grandchildren had their own specially designed and hand-crafted quilts. She kept her toes in education by participating in the kindergarten co-op and by substitute teaching in the Pleasanton School District.

Upon settling in Pleasanton, Chilli also became politically active. She spoke out for women’s health issues, she was a founding member of the Tri-Valley chapter of the National Organization for Women (NOW), she volunteered at Planned Parenthood, she taught sex education, she marched in various protests in support of social justice and was a strong proponent of the Equal Rights Amendment. She was the campaign manager for a friend who was elected the Supervisor of the Alameda County Board of Supervisors in the mid-1970s. Her interest in activism carried on to include marching in the Livermore March for Science in 2017.

Not originally an “outdoor girl”, Chilli was convinced by Bud to go camping for their honeymoon and she became a convert. As the family grew, they went on many car trips across the Southwest and camping trips in the mountains and later, she became an avid backpacker, spending many summers trekking under the wide open skies on the trails in the Desolation Wilderness and Emigrant Wilderness backcountry areas. Her favorite activity while driving or hiking or just sitting around the campfire was singing camp songs.

Before settling in Pleasanton, Chilli had traveled in Europe and Mexico. Once settled in Pleasanton, she took up international outreach with Bud. Over the years, they hosted an exchange student from Hong Kong and two students from Spain, they were very involved with the Pleasanton Tulancingo Sister City Association activities (dinners, visits, hosting, travel, etc), they traveled to Cabo San Lucas for the solar eclipse in 1991 and they traveled to China for a tour of various Chinese railroads

After all of her children were out of the house, Chilli returned to activism at the foundational level by becoming a Booklegger and doing library and reading outreach in the schools. She wanted to inspire children to read so they would be motivated to learn and think for themselves. She also made sure that her grandchildren were showered with books for birthday and Christmas gifts. Later, she combined passion and work as a book consultant at Goodenough Books in Livermore.

In her later years, Chilli moved out of the Alisal homestead and into the newly built Stoneridge Creek Retirement Community - in fact, she was one of the first tenants! At Stoneridge, she participated in a wide-range of activities, including seminars, exercise and yoga.

Chilli was a long time and loyal member of the Unitarian Universalist Church in Livermore. She and Bud joined the church in its earliest incarnation as a lay-led group that met in an old house on First Street. There, she led Sunday School and later served on many committees and, in later years, sang in the choir.

Chilli was preceded in death by her husband, Bud, and her sister, Judith. She is survived by her children, Belinda (Kevin Burns) of Sonora and Vivian of Sacramento, Keith (Michele Davis) of Pleasanton and Craig of Vallejo; her grandchildren, Becky, Marissa, Sarena, Dylan, Nichole, Andrew, Lane, Ashley and Nathaniel, and three great-grandchildren.

The Pleasanton/Tulancingo Sister City Association (PTSCA) extends our condolences to Chilli’s family. Chilli was a good friend and member of PTSCA. Chilli was active and very supportive of our sister city association, especially supportive of her husband Bud who served as our treasurer and of her two grandchildren, Nichole and Lane who participated in the student exchange program. We will miss Chilli and may she rest in peace….Her friends at PTSCA.

Chilli and I taught together at James Madison School in San Leandro. We were temporary roommates for 18 months while my husband was stationed overseas. During that time, she taught me to sew, shared precious recipes which I still make. We kept in touch with yearly update letters and emailed when it came into being. We attending their very special anniversary gathering and they attended our 50th. She adored her family. Forrest and I send love and blessings as you learn to live without your parents but with the special memories of lives well-lived.

Dear Craig and family: I have fond memories of Chili at the house chatting in the kitchen. She was very direct and spoke her mind. She loved you all so much and was proud of each of you. May she watch over us all. Wishing you all Strength peace and smiles. Blessings and love, Amy