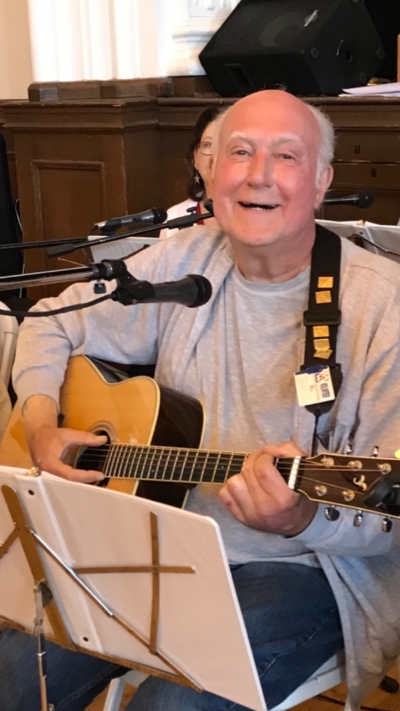 William John Lindke Jr. passed away on July 6th, 2019 after a valiant battle with lung cancer. He has touched the lives of many by sharing his love of music through his guitar and song.

Following his military career, he joined the staff at Foothill College, Los Altos, CA where he worked in the Admission and Records Department as the Registrar.

Following his retirement, he spent most of his time volunteering in the community by singing and playing his guitar to residents at Quail Gardens in Livermore, CA. He also played for patients and staff at Valley Medical Oncology in Pleasanton, CA. He was a member of Sally’s Pub Group entertaining veterans at the Livermore Veteran’s Nursing Home weekly for the past 11 years. Bill and his six grandchildren could be found helping out at the Livermore Thanksgiving Community Dinner.

Bill was also a member of the Fleet Reserve Association, VFW, American Legion and a member of St. Charles Borromeo Catholic Church where he could be found participating at the weekly “donut social”.

Bill was awarded a Voluntary Service Certificate through the Department of Veterans Affairs in appreciation of his 11 years (1,551 hours) of service.

Bill is survived by his loving wife, Carol A. Lindke, devoted children, William John and wife, Margie G. Lindke 5th and children, Ashley, Nicole, Tara and Sean (Baltierra), and daughter, Maureen Denise and husband, Raymond J. Wright and children, Ryan and Mackenzie all of Pleasanton, CA. He is also survived by his sisters, Betty Munson of Middleport, NY and Audrey Nachreiner of North Tonawanda, NY.

His generous loving spirit will be missed by all who knew him.

In lieu of flowers, a memorial donation may be made online at HopeHospice.com.