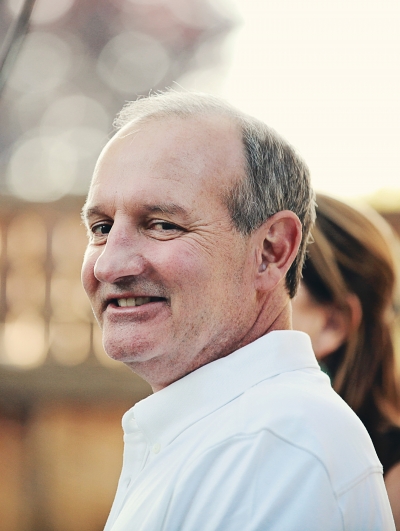 Tony J. Costello, who in more than 30 years of coaching, teaching and mentoring inspired hundreds of collegiate and high-school basketball players to better lives, died Aug. 25, 2013, after a valiant year-long battle with cancer. He was 57.

Tony, the men's head basketball coach at Las Positas College, and Kinesiology and physical education instructor there, was surrounded by loving family members at the time of his passing, a fitting tribute to a person who valued loyalty, commitment and family in both his life and his work. The oldest of eight children born to Joan and Tony Costello Sr. of Pleasanton, Tony carried those values through his life and made them the cornerstones of an overwhelmingly successful career.

In more than three decades as a coach, Tony influenced hundreds of young athletes to deliver superior effort, strive for greatness, and reach higher levels of performance. As a community college coach, both at Chabot College and Las Positas, he shepherded scores of players on to four-year institutions, many of them attaining the athletic scholarships that had eluded them as they left high school.

Along the way, Tony was honored multiple times as Coach of the Year, his teams winning at consistently high levels. He left Chabot with a 250-179 record in 14 seasons as head coach, then took over a newly-created Las Positas program and added 100 victories in his first six years.

Tony was born in 1956 in Philadelphia, PA, and grew up in Lancaster, PA and Hagerstown, MD before moving with his family to Pleasanton in 1973, toward the end of his junior year of high school. He went on to make the Amador Valley High School varsity team as a senior, contributing to an undefeated league champion while playing for legendary Amador head coach Skip Mohatt.

Tony became a head basketball coach at age 23, taking over the program at Dublin High School (his youngest brother, Tom Costello, is currently the Dublin head coach). After a stop at Justin-Siena High in Napa, he arrived at Chabot as an assistant to another renowned head coach, Rich Botelho. Three years later, Tony succeeded Botelho at the helm of the program.

Tony?s tenure coincided with some of the most successful basketball campaigns in Chabot?s history. His teams qualified for the regional playoffs 12 times, won two conference championships, and reached the Sweet 16 of the state community-college tournament three times. Along the way, he sent dozens of players on to four-year institutions, including 15 who went from Chabot to Division I assignments and another 33 who played either at Division II or NAIA.

Tony was known by his players for his willingness to challenge them and for his compassionate dedication to their needs. It was routine to find him trying to arrange for a player to find decent living quarters or basketball shoes that fit, and he often arrived at Costello family gatherings with one or more of his players in tow ? especially at the holidays, when many of them were far from home.

Tony was known to go to great lengths to find good study environments for his players; his 1997 Chabot team won the State Scholar Team Award with an overall Grade Point Average of 3.3. Tony was president of the California Community College Men?s Basketball Coaches Association from 2003 to 2005.

At Las Positas, Tony was present for the birth of a program. Employing the same coaching techniques, and using his favored up-tempo offensive style whenever possible, he led the Hawks to success almost immediately. His teams reached the playoffs three times and advanced to the Sweet 16 in 2012.

Tony?s family meant everything to him, and rallied to his support repeatedly over the past year. In keeping with the modesty and self-deprecation that characterized his career and life, he often downplayed the effects of his treatments to fight pancreatic cancer. Even in the final weeks of his life, visitors remarked that he appeared fitter than he had in months. He showed up for work at Las Positas six days before his passing.

A Memorial Mass for Tony will be held on Thursday, Aug. 29, at 10:30 a.m. at St. Augustine Catholic Church in Pleasanton. A public celebration of his life is scheduled for 2 p.m. Saturday, Aug. 31, at the Las Positas College sports complex.

Photo Gallery
0 photos Upload a photo
Remembrances
1 entry Submit a remembrance
From Jason Bell
Oct. 7, 2013
I had the privilege of not only being a member of Coach Costello's team at Chabot College, but I had the greater privilege of knowing Tony, off the court. You'd search your entire life looking for a single soul on this planet who had anything neg...
Read more
Video
Upload a video