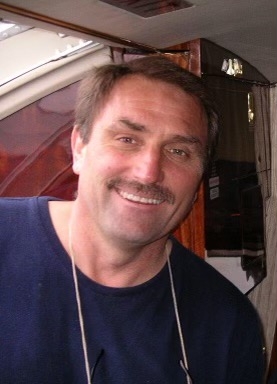 Born in Chicago, IL to Florence and Frank Drengacz, the youngest of 3 children. At age 6, Tom’s family moved to Baltimore, MD then to Pleasanton, CA. Tom spent his youth in rural Pleasanton in the 1960s, exploring creeks, riding bikes and going on adventures with his close friends. He stayed close to many of them for the rest of his life. In high school, hang gliding became Tom’s passion. He built his own gliders in the garage, eventually taking off from Glacier Point in Yosemite. Tom was a sportsman, playing soccer in high school, rugby with the Hayward Area Griffins, and then the famous Dirty Dozen rowing team, getting to the Olympic quarterfinals in 1984. He worked in the gem industry for several years. His passion for flight now focused on airplanes, Tom became a flight instructor then corporate pilot. Flying for the UN in Africa in the 1990s led to many years flying Learjets, Challenger 605s and Gulfstream 450s for FlexJet, till his recent medical retirement. He saw the Earth from above and toured almost all the land on the globe. Tom was born to fly, and born to be wild. He lived life his way. Tom is survived by wife Blair LeGette, sister Nancy Drengacz Abramson (Curt) and brother Frank (Julia), sister in law Sandy Drengacz, nephews Sam Pumroy and Noah Abramson and niece Haley Wall, grand nieces and nephews Maya and Calvin Pumroy and Bob and Bruno Wall.

Photo Gallery
0 photos Upload a photo
Remembrances
0 entries Submit a remembrance
Memorial service
A memorial mass will be held at St. Augustine’s in Pleasanton on June 26th at 11 am.
About this site     Contact us