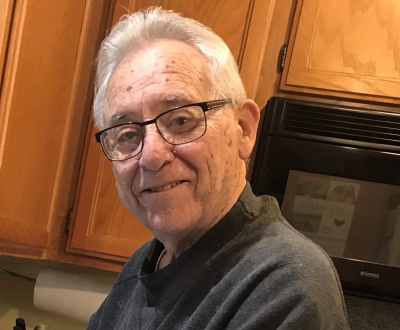 Terry was born in Detroit, MI to Angelo and Leah Scavone. He is survived by his wife, Judy, children, Mary (Guy), Rebecca (Mark), Angelo (Mary) and five grandchildren, Tessie, Tommy, Max, Sam and Jac. He is also survived by his identical twin brother, Mike and brother, Tom.

Terry was in the Army from 1956 to 1958. He graduated from Wayne State University in Detroit with a BS in Mechanical Engineering. Shortly after graduation, he moved to San Francisco where he began a long career in Heating and Air Conditioning. He owned Felix Sheet Metal, worked at Marina Mechanical, retired and found a new job & hobby. Golf! He worked at the Pleasanton Driving Range and also worked on his golf game.

Terry lived in Pleasanton for 55 years. He was active in his Children’s activities, Indian Princesses, soccer, baseball and had much fun working with the Foothill Booster Club. One of his joys was having his grandsons come over for a cut throat game of Mexican Train. He also looked forward to his semi-weekly golf game and breakfast at Vic’s. He & Judy travelled throughout the US and Europe. Terry was known for his delicious spaghetti sauce. He also was a master at the bar-b-que. His grandkids loved his baby back ribs. Terry’s easygoing manner and ready smile will be missed by his family and friends.

In Terry’s honor, donations can be made to Hope Hospice, Dublin, or First Tee of the Tri-Valley, Pleasanton.

A celebration of life will be held at the Highland Oaks Recreation Center on October 3rd at 1:30 PM.