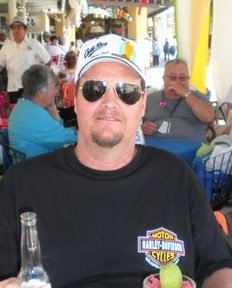 Robert Bruce Donaldson was born in Oakland, California, spending most of his life in Pleasanton and Livermore with several periods of adventure in the mountains of the Sierra Nevada.

Former neighbor and friend, Tim Hunt, of Pleasanton, recalls that he was a skilled heavy equipment operator who did excavation and landscaping work with his backhoe. “He also took great interest in caring for DJ and Shea, sons of a former girlfriend, often bringing them to work with him and sneaking them in to enjoy the neighbors’ swimming pools at the end of the day during the hot summer months.”

Predeceased by his adoptive parents, Robert E. Donaldson in 1979 and Geraldine P. Donaldson on December 21, 2016, he is deeply missed by his wife of two years, Kathy Lenn Donaldson, sisters, Karen and Jan, niece, Amy, and DJ and Shea, whom he considered as family. He was an active, cheerful child and carried those qualities into his adult years, despite suffering from two rare forms of cancer over the past 12 years. He died on his 57th birthday after complications from surgery near Paris, Tennessee, where he had moved with his mother several years ago. He was someone whose motto might well have been, “Go big or go home!” Now, he is home.

Photo Gallery
0 photos Upload a photo
Remembrances
0 entries Submit a remembrance
Memorial service
Pending in Paris, TN
Make a donation
none
About this site     Contact us