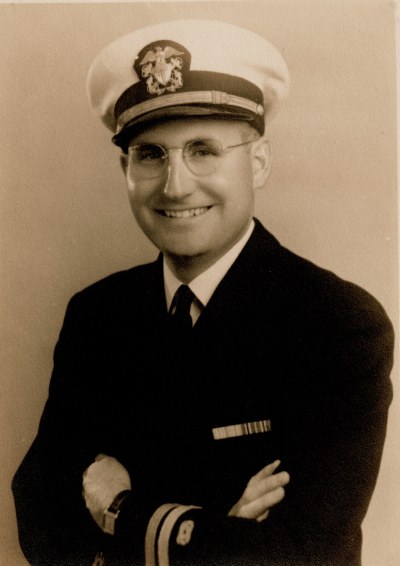 L. "Arnold" Abrott passed away November 5, 2021. He was born August 26, 1916 to Chester and Lenore (Sinclair) Abrott. Chester passed away when Arnold was eleven, Lenore when he was thirteen. He was preceded in death by his sister Lois Blacow, and his wife of 76 years Annette (Georgis) Abrott. Arnold is survived by his sons Arnold (Gloria) and Timothy (Kimberly), four grandchildren, and four great-grandchildren.

Arnold graduated from Amador High School in 1934, and graduated from U.C. Berkeley with a Bachelor’s Degree in Civil Engineering in 1939. He worked for Kaiser Sand & Gravel for 40 years where he retired as President and General Manager.

Arnold was commissioned as a U.S. Navy Ensign in May 1942 and was later promoted to Lieutenant Commander during World War II. He was a Pleasanton Planning Commission Councilman for seven years, Chairman of the Planning Commission for two years, served on The Pleasanton Elementary School Board for six years, four of which he was President, and served on the Board of Directors for Valley Memorial Hospital in Livermore for nine years, three years as President. He was also a director for Community First National Bank of Pleasanton. With all of Arnold’s accomplishments his role as a husband, father, father-in-law, grandfather, and great-grandfather is where he shined the brightest. He and Annette loved to spend time with family, travel, play card games, and golf. In Arnold’s later years he became an avid walker.

Photo Gallery
0 photos Upload a photo
Remembrances
0 entries Submit a remembrance
Memorial service
Arnold’s life will be celebrated with immediate family at a graveside memorial.
About this site     Contact us