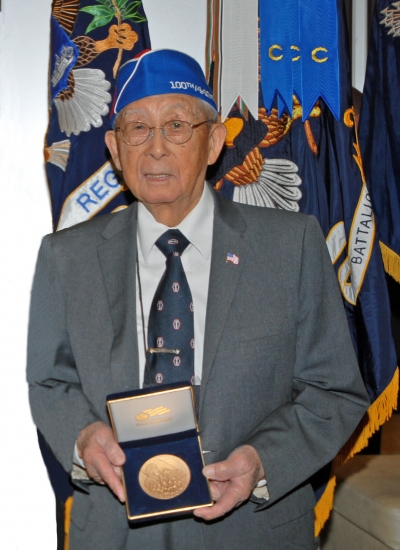 Kaoru (Carl) Masuda, loving husband, father and grandfather, passed away peacefully while surrounded by his family on November 29, 2017 at the age of 97. Kaoru was born in San Francisco and grew up in Pleasanton, CA, with his father farming hops on Hopyard Road, and in Cortez, a Japanese-American farming community (near Ballico, CA), where he, along with his wife Yuriko (Yamamoto) of 65 years, raised carrots, peaches and almonds, finally retiring from farming at the young age of 87. Kaoru and Yuri were active members at Cortez Presbyterian Church and Japanese American Citizen League (JACL), and enjoyed contributing towards their community and beyond. Through the years, Kaoru enjoyed traveling with the family, fishing, bowling and baseball in his youth, as part of the Cortez Wildcats. Kaoru was also part of the 100th Battalion/442nd Infantry Regiment combat team (“F” Company) during WWII, participating in the “Go for Broke” rescue of the Texas Lost Battalion in the Vosges Mountains of France, and the liberation of both Bruyéres and Biffontaine France. For their heroic efforts, the 100th/442nd combat team and MIS (Military Intelligence Service) received the Congressional Gold medal in Oct 2011. Kaoru is survived by his children, Agnes (Bob) Kiyoi of Santa Barbara, Calvin (Kathy) Masuda of Pleasanton, Ann Masuda (Russell Yamano) of Pasadena, 6 grandchildren and 23 nieces and nephews. Kaoru is predeceased by his wife, Yuriko; parents, Tomenosuke & Kazue Masuda, brother Seio Masuda; sisters Miye Tsubota and Ida Takahashi.

Photo Gallery
0 photos Upload a photo
Remembrances
0 entries Submit a remembrance
Memorial service
At Kaoru’s request, private services will be held at the San Joaquin Valley National Cemetery and Turlock Memorial Park for family and relatives only.
About this site     Contact us