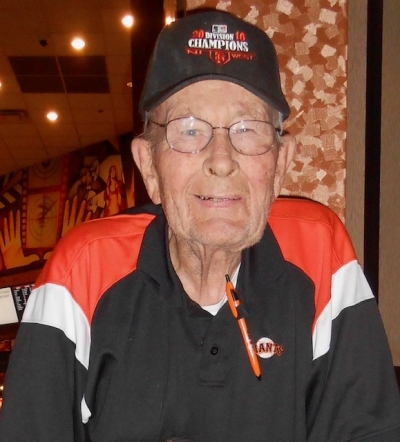 John Michael "Mike" Watson, 84, passed away at his home on August 5, 2020. He was born July 4, 1936 in Livermore, California, the son of Merle Kamp and John Marion Watson of Pleasanton, California. Mike was raised by his mother and stepfather, Paul Kral. He has one younger sister, Patsy Flores (Andy) of San Jose. Mike loved growing up in Pleasanton. His family lived on East Angela and later on Silver Street. His fondest early memories centered around all the wonderful years he spent at his grandmother’s (Eilene Mohr Kamp Sheffield), at the many big family gatherings at the nearby Mohr Estate, and, later, his fun-filled years at "PES#56" (his jovial moniker for Pleasanton Elementary) and Amador High (Class of '54). While at Amador, he was active in sports and worked on the school newspaper. He also worked as a stringer for the Pleasanton Times and the Livermore Hearld. He covered all the local high school sports. He loved Pleasanton! He got his AA Degree at College of San Mateo, then proudly served 8 years in the U.S. Army, attaining the rank of Master Sergeant. When he returned, he went to work for the Oakland Tribune as a copy boy, which brought endless exploits and tales. He had a lifelong love of baseball -- and ALL sports. Coupling that with his newspaper skills (honed at Amador and at CSM), he became a natural sportswriter. Recognizing those talents, he was hired away from the Oakland Tribune by the Hayward Daily Review, where he worked for 25 years as a sportswriter and, later, Special Sections Editor. While Mike worked at the Daily Review, he met his future wife, Carolyn Claus, when she was an SJS journalism intern at the newspaper one summer. They would have celebrated their 54th wedding anniversary on August 28, 2020. Mike and Carolyn lived in the Northgate area of Fremont, California, where, for 43 years, neighbors said he was “a wonderful friend and neighbor.” He was active in all of his daughters’ endeavors, including serving on SSC boards at both Warwick Elementary and Thornton Junior High, as well as several South County softball boards. He was an FGSA softball coach and a CYO basketball referee. He always made time for fun-filled family vacations – Disneyland and Yosemite were favorites. Following his many years in the newspaper business, Mike's amiable personality caught the eye of personnel at Long's Drugs. He was hired and worked at Bayfair Long's and Greenhouse Long's until he retired. After a year of retirement, he was lured back to help when Long's bought and converted a Payless store in Newark. His retirement years naturally were spent enjoying all the sports he could watch (especially his beloved San Francisco Giants), participating in many activities with Native Sons of the Golden West, Washington Parlor #169, and enjoying the activities and achievements of his 8 greatly loved grandchildren. Mike was a friendly and kind, good-natured man, a doting father and grandfather. He will lovingly be remembered by his wife, Carolyn, his three daughters, Jennifer Watson-Bird (Robin) of Livermore, Wendy Williams (Brad) of Merced, and Courtney Peterson (Kim) of Concord, and his eight grandchildren, Brittany, Chase, Wyatt, Eli, Brooke, Amelia, Noah, and Nathan, and all who were lucky enough to know him. A celebration of life service will be planned in the future. In lieu of flowers, a donation may be made in his memory to the Junior Giants Organization (1-877-JR-GIANT, Email: [email protected]) or Hope Hospice (1-925-829-8770, Email: https://hopehospice.com)

Photo Gallery
0 photos Upload a photo
Remembrances
0 entries Submit a remembrance
Memorial service
A celebration of life service will be planned in the future.
Make a donation
In lieu of flowers, a donation may be made in his memory to the Junior Giants Organization (1-877-JR-GIANT, Email: [email protected]) or Hope Hospice (1-925-829-8770, Email: https://hopehospice.com)
About this site     Contact us