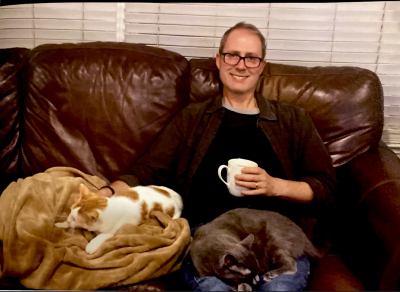 John Milton Peterson was a man so remarkable that he actually had not one, but three birthdays. Born in Pequannock, New Jersey, in June 1966 to Al and Dee Peterson, John grew up as all kids did in the 70s: wild and free until it got dark — riding bikes and building forts in the woods, playing baseball, and creating imaginary worlds with his older sister and younger brother. When the family moved from New Jersey to California, John planted his roots firmly in the East Bay, first in San Ramon and later in Pleasanton. John attended Cal State East Bay where he was an active member of the Zeta Omicron chapter of the Delta Sigma Phi fraternity. At college, John not only earned his Bachelor’s degree, but he also gave up bachelorhood for good. While a student, he met Kelly Howell, whom he married and loved every single day of his life. They built their lives together in Pleasanton, raising two beautiful daughters, Allie and Maddie. John was an IT wizard, with long tenures at both PeopleSoft and Workday where his pranks were legendary. He loved being a father and always found a way to make his girls laugh — even when he was enduring chemotherapy for Non-Hodgkin’s Lymphoma. John battled cancer like a champion and celebrated his second birthday in 2001 after a life-saving bone marrow transplant. John was happiest when he was with his wife and daughters, typically with a mug of tea in his hand and a cat on his lap. The love story he shared with Kelly would shine bright for more than 30 years, and never brighter than in his last few years. After developing interstitial lung disease, John needed another miracle: a lung transplant. After years of waiting, he got the call, and on March 9, 2021, John celebrated his third birthday. It took extraordinary courage and mental strength to recover from the transplant surgery, but he persevered with good humor and grace. John spent months in the hospital and finally got to go home in time to see his grandson take his first steps. A bout of Covid and pneumonia brought John back to the ICU to fight one last time where he passed away peacefully on March 3, 2022, with loved ones by his side. He bravely faced each day with humility, earning him the respect and admiration of everyone he met on and off the ward. John will be loved and remembered for many things: notably his epic Thanksgiving stuffing, his joyful silliness, his workplace tomfoolery, his appreciation for a cold gin & tonic with two limes, and especially his absolute love for his family and friends. John Peterson is survived by his wife Kelly, daughter Allie, son-in-law Tim, grandson, Salem, and daughter Maddie; parents Al and Dee; sister Michelle; brother Scott and sister-in-law Michele; nieces and nephews Ava, Zoe, Liam and Sam; and extended family in the UK. If you have not already done so, please consider becoming an organ donor.

Photo Gallery
0 photos Upload a photo
Remembrances
0 entries Submit a remembrance
Memorial service
A memorial is planned for Saturday, March 12 at 2:30 pm at Graham-Hitch Mortuary, located at 4167 First Street in Pleasanton.
Make a donation
In lieu of flowers, the family requests donations be made in John's honor to the UCSF Lung Transplant Program. Please visit https://makeagift.ucsf.edu and choose 'other' and designate the MC2 Lung Transplant Patient and Family Fund 702-7169. You can also mail a check to the UCSF Lung Transplant Patient and Family Fund, 500 Parnassus, MUW 420, Box 0115, SF, CA 94143.
About this site     Contact us