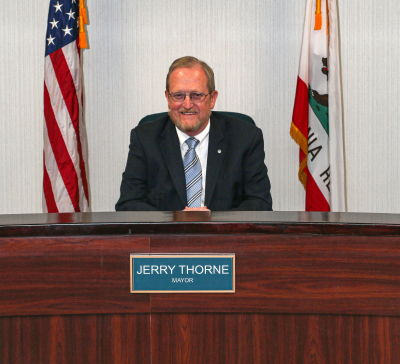 Born in Union City, Tennessee on July 28, 1944, Jerry was the only child of Vangie and Horace White ("Dugan") Thorne. He died on March 27, 2022 peacefully at his home with his wife Kalee in Marana, Arizona.

Jerry went to the University of Tennessee at Martin where he was a member of the Phi Sigma Kappa fraternity and was a drum major in the marching band. He graduated in 1966 with a degree in Chemistry.

He led a successful career for 26 years at Hewlett Packard / Agilent Technologies as a health and safety engineer, which brought him all over the world. He had a second career as a civil servant, beginning many years ago leading an effort to get a 50-meter swimming pool built in Pleasanton, and culminating in his election to Mayor of Pleasanton in 2012. His list of accomplishments is long and distinguished, and his dedication to the city he loved will not be forgotten soon.

Jerry was a proud veteran of the U.S. Army. He supported several different organizations, but the ones providing support to military, veterans and their families were particularly close to his heart. Jerry loved music. He played the trumpet, and he often woke the house playing Reveille on the bugle. He also was extremely interested in history, World War II history in particular.

Most importantly, Jerry was a proud father and grandpa, and a loving husband. When Keri was a child, he could be found every weekend on the side of a soccer field or swimming pool with his video camera (before they were small and manageable). In more recent years, he enjoyed nothing more than a visit from his grandchildren.

In July 2021, he and Kalee moved to Dove Mountain in Arizona to enjoy their retirement. He finally fulfilled a lifelong dream of owning a Corvette and enjoyed exploring his new area with the top off and Dire Straits playing on the radio.

Jerry was preceded in death by his wife Sandra Roy Thorne in 2018. He is survived by his wife Kalee Thorne, his daughter Keri Thorne Gough, his grandchildren Eilís and Finn Gough as well as his step grandchild Ashley Kham and step great grandchildren Airsten, Zaiden, Nova and Kinglsey Kham.

Photo Gallery
0 photos Upload a photo
Remembrances
0 entries Submit a remembrance
Memorial service
There will be a visitation held on April 7, 2022 at 6:00 p.m. at St. Clare’s Episcopal Church in Pleasanton. The Funeral service will be held on Friday April 8, 2022 at 3:00 p.m. also at St. Clare’s Episcopal church, followed by a celebration of life reception at 5:30pm at the Pleasanton Senior Center.
Make a donation
In lieu of flowers, donations can be made to The American Legion: American Legion PO Box 823 Pleasanton, CA 94566 Made checks payable to the American Legion Post 237.
About this site     Contact us