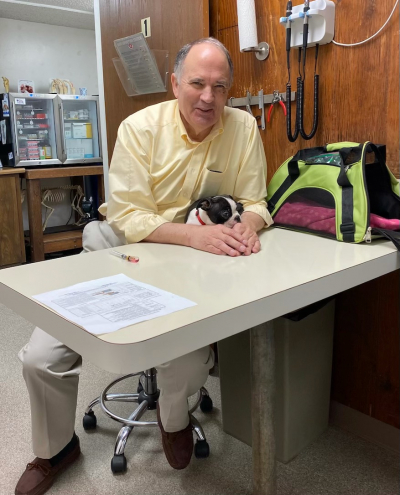 On August 23, 2021, a great man came to the end of his mortal life after succumbing to Covid despite being vaccinated. This man held many titles during his time on Earth: son, brother, student, Eagle Scout, swimmer, lifeguard, vet student, convert, husband, father, veterinarian, doctor, builder, gardener, president, uncle, bishop, grandpa. This is that man's story.

James Leland Teare was born on September 24, 1946, in Santa Fe, New Mexico to Elzada Bessie Young and James Lindgren Teare. Growing up in nearby Los Alamos provided opportunities for many adventures: learning, from Grandpa Young, to stealthily tear off the corner of a Christmas present wrapping to learn what was inside; first gun at 11-years-old; Eagle Scout earned at 12; survived a tornado at Philmont Scout camp; first job (construction) at 14. Known to his family as Jamie, he played football for a couple of years but settled on swimming as his sport of choice. As a junior at Los Alamos High School, Jamie took a future-defining job: an assistant at the Los Alamos Veterinary Hospital. He said he was, in his own words, “entranced.”

After graduating from high school, James began studying to go to vet school. In 1968, at the College of Southern Utah (today known as Southern Utah University) in Cedar City, Utah, his roommate invited James to join him, the girl he was dating, and her friend. It must have been a great date because they were engaged one month later. James married Connie Stewart on August 22, 1969, in Fillmore, Utah. That evening, she went home with her parents, and he went to the hotel with his parents. The next day, they were sealed in the Manti Utah Temple, and they began their married life with a honeymoon to Disneyland. Next stop was Colorado State University in Fort Collins to attend Veterinary School at Colorado State University. Two sons were born during school, Shawn and Cody. Dr. Teare graduated from vet school in 1974 and they moved to Massachusetts for his internship. Daughter Amanda was born while they were back East. In 1975, they moved to Corte Madera, California where he would work for Marina Pet Hospital on Lombard Street in San Francisco. Three more children were born to them, Alicia, Preston, and Joshua. Painfully, Preston passed away less than a year after his birth due to a liver condition. In 1984, Dr. Teare took a job at a vet hospital in Pleasanton, California across the Bay and the family moved to nearby San Ramon. In 1995, Dr. Teare began running the hospital and the Teare Veterinary Hospital was born.

In 1996, tragically, Connie passed away after a three-year on-and-off battle with colon cancer. In 1998, his first of many grandchildren was born. Jim found love again with another who had lost a spouse. On February 12, 2000, he married Cheryl Goodfellow. Combined, they had nine children and four grandchildren. Today the number of grandchildren is 35.

We will dearly miss talking to him; sharing his tacos and beans; building LEGO with him; binging on his whole-wheat donuts; enjoying movies (Rango, anyone?); and eating too much ice cream together. The world is a better place because he lived here.

Funeral was held on Friday, September 10, 2021, at 655 Old Orchard Drive in Danville. The proceedings were broadcasted. The burial took place on September 18, 2021, at Meadow Cemetery in Fillmore, Utah.