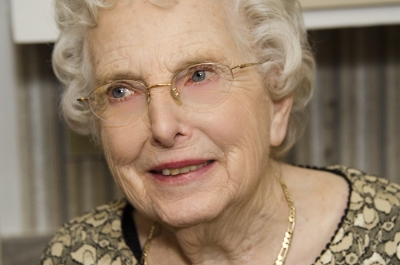 Irene Baker Pignolet of Pleasanton, California passed away peacefully in her sleep two days before her 95th birthday on December 13, 2016. She was the last of her generation, joining her husband, their siblings, spouses and friends.

Her life began in Amsterdam, Ohio on December 15, 1921, where she was born the youngest of four children to Blanche and Charles Baker. The family moved to Cleveland, Ohio where Irene completed high school and continued to live until after she was married.

After high school, Irene began working at a light bulb company where she saved up to buy her very own Singer sewing machine. Sitting at that Singer, late at night, she became the talented seamstress she was, creating perfectly sewn, beautiful garments for decades.

Often after work, Irene and her sister Betty would enjoy a Coca-Cola at the Five and Dime Store where Chuck the Soda Jerk once invited her to a show, beginning the relationship of a lifetime and a marriage of 55 years. On September 5, 1942, Irene married Charles J. Pignolet in a simple ceremony. Since she was not quite of age yet, her parents had to give their signatures of approval, while Chuck was barely of age himself, only a week over 21. Shortly after they were married, Chuck left for the war, while Irene stayed home with her sister Betty and her parents. When Chuck came back from World War II and was finishing engineering school, the Pignolets started their family.

In November of 1958, Irene traveled alone with her four children under the age of 10, across the country for nine hours on a Prop Plane, to join Chuck in Pleasanton, CA, where he had begun his career as a Mechanical Engineer for Sandia Laboratories a few months prior.

Pleasanton, California is where the Pignolets settled, making it their forever home, spending their first night reunited as a family in the historic Pleasanton Hotel. Irene embraced the town and the surrounding community, joining the Presbyterian Church, Book Clubs, Lunch Bunches, Ladies Groups and more. She and Chuck were very social people who often entertained friends and family in their home, where Irene was the ideal hostess, serving flawless dishes on a beautifully set table. Living so far away from their family, encouraged Irene to make her friends her family.

When the Pignolets were not entertaining at home, they loved dancing and going out. One of Irene’s favorite places to dance and listen to Big Band music with Chuck was Haps in downtown Pleasanton, less than a mile from their home. She also loved to go to musicals, plays and the movies.

Irene lived life fully, keeping as active as she could, by challenging herself both physically and mentally. She rode her bike from Pleasanton to Livermore just to see if she could do it. She completed the Bay to Breakers race three times. The first time, a test run, to insure that she could complete the race without embarrassing or letting herself down in the actual race. She even cross country skied up Mount Rose one time. On Irene’s 80th birthday, her wish was to walk across the Golden Gate bridge with her family and friends, which she completed with gusto on a gorgeous clear December day in San Francisco.

Everything Irene attempted, she did with great pride, precision, planning and organization. Whether it was working as: the Head of Home Economics, an Accountant Assistant at Nuclepore, a gift wrapper at Macy’s, a Home Maker raising children and grandchildren, and even a student at the local Community College.

She will be remembered as a loyal friend and respected matriarch who was a generous and attentive host in her beautifully kept, immaculate Pleasanton home. She enjoyed visiting with company sitting around the dining room table under her Tiffany lamp, engaging in great conversation, over a delicious meal followed by her scrumptious fresh baked Snickerdoodle cookies.

She is survived by her four children; Dana (Elvie), Mark, Lisa (David), and Greg (Teresa); her seven grandchildren and her six great-grandchildren.

A celebration of life memorial service will be held at a future date. In lieu of flowers, donations to St. Jude’s Children’s Hospital or the American Cancer Society would be greatly appreciated.