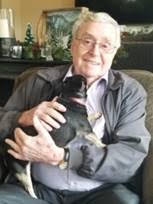 Guenter was born in Germany on December 8th, 1934. He was one of four boys; twin brother Helmut, brothers Reinhold and Horst. Guenter and Luise met in Germany and were married in May 1957. They followed his parents and brothers to the United States from Germany in August of the same year. They resided in Oakland, California; then San Leandro before moving to Pleasanton in 1971.

Guenter served two years in the U.S. Army, nine months after coming to the United States. He was stationed in Fairbanks, Alaska. He became a United States citizen in 1965. After serving his country, he continued working in his trade as a painter, a trade he learned in Germany. He was a member of the Painters Union Local No. 3, retiring in 1997.

He was a true master craftsman; hard-working, honest, generous and dedicated to his work and trade. In his free time, Guenter enjoyed reading and watching television programs related to history, current events, architecture, landscapes and geography. He had a love of steam locomotives, trains and wildlife. He enjoyed feeding the hummingbirds that visited his backyard and loved watching them from his beloved recliner. He also was frequently entertained by the mischievous squirrels that scurried around the yard. He enjoyed visits from family members who often brought the family dogs and on occasion, a bird. He was a true animal lover.

We would like to express our thanks and appreciation for the many calls from family and friends, for the doctors and nurses from Kaiser who truly cared about his health and well-being. We would also like to thank MaryJane and Agata from Kindred Hospice who managed his treatment and care with kindness and compassion.

Per Guenter’s request there will be no funeral service. His family will honor the requests he made and remember his life privately.