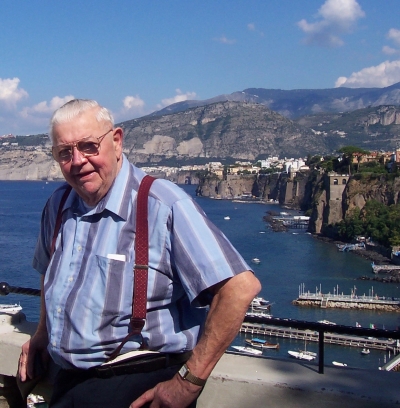 George Harold Becker Jr. died Sept. 28 after a long illness. He was 87.

A native of Chicago, George moved from Southern California to Pleasanton with his young family in 1971. He commuted long hours to his job with the San Francisco Newspaper Agency as a journeyman pressman and member of the Graphics Communications International Union.

At home, he grew roses and tomatoes and he was a tremendous supporter of his late wife Kristina's quilting and needle arts.

During the Korean War, George served aboard the destroyer USS Porter. His tour of duty to 22 ports in 13 countries ignited a lifelong passion for travel and he and Kristina enjoyed many trips together throughout the United States and abroad.

George was a humble man, well known to the neighborhood children and beloved by his family and friends. He liked reading the daily newspaper, watching history documentaries and enjoying a good meal.

Photo Gallery
0 photos Upload a photo
Remembrances
0 entries Submit a remembrance
Memorial service
At his request, no services were held. A celebration of George's life is pending. Arrangements by Graham-Hitch Mortuary.
About this site     Contact us