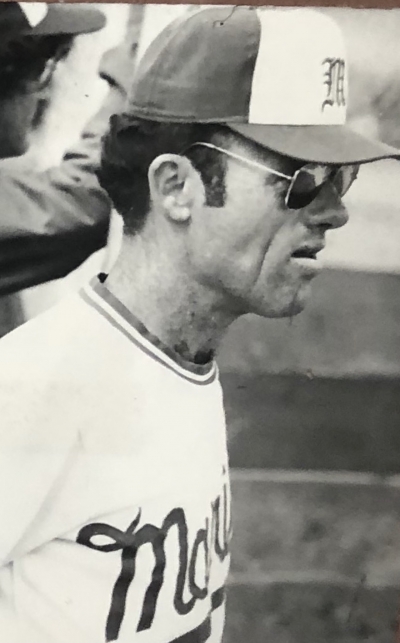 George Dunphy passed away peacefully, with his family by his side, at Mt Eden Hospital, in Castro Valley on July 6, 2021 at the age of 85. He lived in Pleasanton, Ca. for the past 40 years, where he provided for his wife and two sons. He will be remembered as a loving husband, devoted father and grandfather, a passionate teacher and coach, and more than a friend to many. George grew up in Emeryville, Ca. and enlisted in the United States Marine Corps on his eighteenth birthday. While serving his country, he was fortunate enough to make the command baseball team, where he honed his skills for the next level. After being honorably discharged from the Marines, George continued to follow his passion, baseball, playing for San Francisco State, while completing his schoolwork to become a teacher and coach. He began his teaching career in 1965 at Marina High School, home of the Titans. “Coach” Dunphy played an instrumental role in the development of a “big time” athletic program, that sent many student athletes on to successful endeavors. He was well respected by his peers, college and professional coaches and scouts, and was a pillar of the local community. When Marina closed in 1982, George brought his unique brand of education to Arroyo High School in San Lorenzo, Ca. His blend of dry humor and subject knowledge was like no other. He quickly gained the trust of the faculty and administration and became the athletic director, the Dons thrived. He officially retired from Arroyo in 2006, but never forgot where he came from. He still attended games and events whenever he could and kept in close contact with his friends, colleagues and past students from both schools. George’s retirement from coaching did not last long. He was tapped to help build a resurging baseball program at Foothill High School, in Pleasanton, Ca. He coached for three more years and left a legacy that will last forever. During that time, he also worked with his sons at their medical supply company in Livermore, CA., as a delivery driver. George was famous for only completing two deliveries per day, because he always knew someone at one of the stops and then had to tell the story to everyone in the warehouse when he returned. The audience was always willing to listen to another great story. George passed as he lived, always thinking of others. He spoke of the lives he touched with such pride and thankfulness. He embodied the occupation of a teacher and lived the title of “Coach”. As the saying goes “He will always be number 14 in our playbook, but number one in our hearts”. We’ll miss you Coach.

George is survived by; his wife, Gerrie, of 56 years; sons Jon and Jason; daughters-in-law, Christy and Brandi; grandchildren Evan, Gabriella, Marcus, Lilly, and Torin; sisters, Donella and Susan; sisters-in law Maddie and Laura; brother-in-law Tony; and many other close relatives and friends who will keep George’s memories alive by continuing to tell his story, just as he would want them to.

A small, private gathering will be held for George, to be followed at a later date by a larger event to include all those whose lives he touched. In his honor, the George Dunphy Memorial Scholarship has been set up at: www.amadorvalleyscholarshipsinc.org

An electronic version of the obituary is available at: www.Neptune-Society.com

Make a donation
the George Dunphy Memorial Scholarship has been set up at: www.amadorvalleyscholarshipsinc.org
About this site     Contact us