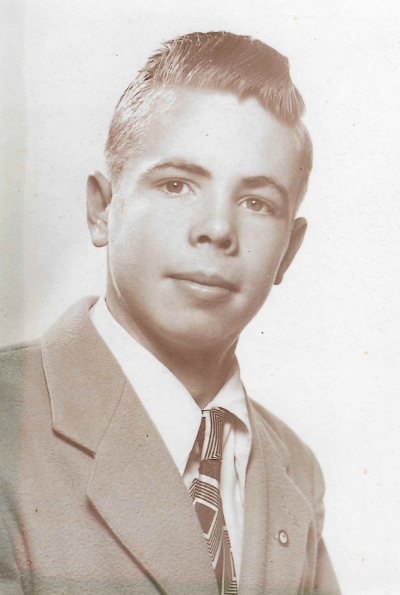 Eugene (Gene) Leroy Sawatzky passed away peacefully on June 23, 2020 near his longtime home in Pleasanton, California after a long and brave struggle with complications due to a stroke. He was 86 years old.

Gene was born in Oklahoma to John and Agatha Sawatzky on December 11, 1933. As the youngest of eleven children, he was an infant when his family emigrated from Oklahoma to Merced, California during the Dust Bowl. There he attended grade school, middle school, and Merced High School. After high school, in an effort to gain independence, Gene moved to Calaveras County, California to live with his older sister, Agatha. It was there and then when he met, fell in love with, and married the love of his life, Carolyn (Carol) Lorraine Acosta. Soon after, they had three daughters (Melonie, Jackie, and Robin) and subsequently moved to Morgan Hill, Campbell, and eventually settled in Pleasanton, California.

Gene and Carol had a great love affair for over sixty years and in many ways they lived the American Dream. Gene was a devoted husband, father, grandfather, great-grandfather, provider, and friend. Gene enjoyed being with extended family and friends, hosting backyard barbeques, card games and croquet matches. He was also a master mechanic. You could often find him at his work bench in the garage taking things apart and rebuilding them, engineering gadgets to help with home life, or crafting toys for his children and grandchildren. Throughout it all, Gene was often quick to smile, offer a beer and make wise-crack remarks in ways that demonstrated his affection for those around him.

Gene began his career as a welder, continued as a mechanic, and finished as a union cement truck driver. He was a hard worker, often working two jobs to make ends meet with his growing family. What Gene admired most in people was their work ethic, because it reflected the fortitude of his humble upbringing and the spirit of the American Dream.

After retiring, Gene and Carol traveled all across North America and Europe, including some memorable trips to Hawaii, Canada, Mexico, United Kingdom, France, and Italy. They loved to camp, and did so all over California where they would fish, play card games, and make s’mores. They also loved to spend time in nature at their property in West Point, California. As the years passed, his devotion to Carol was most clearly demonstrated by the decades of loving care he provided Carol throughout her long illness.

Gene was also a caring grandfather to his seven grandchildren (Matthew, Danny, Lynn Ellen, Marissa, Zach, Ben, and Elle). He built treehouses in the yard, a go-cart from wood and parts he had on hand, and made slingshots for each of them. When he could, Gene taught them to fish, to love afternoon baseball games, and to enjoy nature!

Eugene will be remembered for his wit, humor, work ethic and great love for his wife and family. He will be terribly missed.

In lieu of flowers, the family requests donations be made to either the National Parkinson’s Foundation or the Sierra Club.