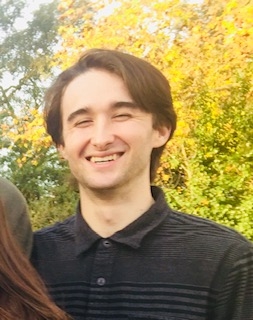 Erik Keith Woodward died unexpectedly Saturday, April 13, 2019 when he was accidentally struck by a vehicle near his Napa home. He was 25.

Erik was born to proud parents, Denise and Fred Woodward, on February 9, 1994, in Fremont, CA. He was welcomed by his excited big brothers, Shane and CJ.

The family moved to Pleasanton when Erik was 5 years old, living near Lydiksen Elementary School, which the three brothers attended. He continued his education at Hart Middle School and Foothill High School. Erik, eager to keep up with his big brothers and hang out with his friends, dabbled in several sports – Little League baseball, lacrosse, CYO basketball, football and wrestling.

“He loved lacrosse because it was something new,” his mom, Denise, recalled. “He was a little guy. He was quite good.”

But all those sports paled in comparison to his zeal for skateboarding, a sport he picked up when he was only 8 years old. Once Erik wrapped up his final wrestling season, he turned his focus to his two main passions – skateboarding and cooking.

“All other sports were off the table, and he just wanted to skate,” Denise said. “He really loved to skate. He was just a skater dude. He skated at FGO (flat ground only skate park) by Hopyard. He loved skating there; it was small. That was before they opened up all the other big skate parks.”

“The cooking came because his mom always wanted to be a chef, and he was always around food,” she added. “Food was always important to his family. There was a pancake breakfast one time, at the Sport Park, and there was this little guy there. The next thing you know, they were letting him cook. He loved cooking. He’d cook anything.”

After high school, Erik expanded his cooking skills through Diablo Valley College’s culinary arts program, ultimately landing his dream job at the upscale, award-winning The Restaurant at Wente Vineyards in Livermore. The highlight of his fledgling culinary career came when he was invited to take part in the prestigious Pebble Beach Food & Wine Classic, where he was thrilled to work alongside celebrity chef Robert Irvine.

“He really loved working out at Wente,” Denise said. “That was a big deal when he got to work out there. They had some pretty high-end (cuisine). He really enjoyed that.”

While Erik relished his brief restaurant career, it was tough to make ends meet as an up-and-coming chef. He moved to Napa about six months ago to share a house with cousins, Nicholas Galli and Chad Bernie, while pursuing a new career with UPS. He had recently completed his training and was working as a full-time UPS driver.

Erik is survived by his adoring parents, Denise and Fred, and his beloved brothers, Shane and CJ. He is also survived by his paternal grandparents, Dick Woodward, of Yountville and Claudette Woodward, of Napa; his maternal grandparents, Anita Azevedo, of Carmel Valley, and Jerry Durham, of Ripon; aunts and uncles, Laurie Congi, Tod Woodward, Lynnette & Pat Bernie and David Durham; and 10 cousins, plus their four children. He was preceded in death by his uncle Vic Congi and aunt Martina Durham.

Photo Gallery
0 photos Upload a photo
Remembrances
0 entries Submit a remembrance
Memorial service
A memorial will be held Wednesday, April 24 at 11:30 a.m. at Berge Pappas Smith Chapel of the Angels, 40842 Fremont Blvd., Fremont, CA 94538. A reception will follow at 1 p.m. at the Veterans Memorial Hall, 301 Main St, Pleasanton, CA 94566. The family encourages friends to wear casual and colorful attire to the memorial in honor of their fun-loving son. Erik’s favorite color was purple. Everyone is invited to attend the memorial and reception. Friends who attend the reception are encouraged to share their favorite Erik stories and memories.
Make a donation
In lieu of flowers, memorial donations may be made to: The Camp Recovery Center 3192 Glen Canyon Rd, Scotts Valley, CA 95066 (844) 808-6950 Donate Life California donatelifecalifornia.secure.force.com/contribute (Erik was passionate about organ donation)
About this site     Contact us