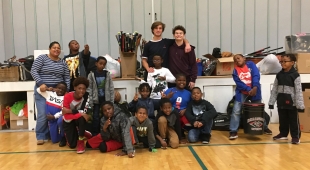 The Equipment for Everyone Club at Amador Valley High collected around 2,000 pieces of athletic gear for disadvantaged Bay Area students in November. Students will host another collection drive at Amador on Sunday (Feb. 23) from noon to 3 p.m. (Contributed photo)

The Livermore-Pleasanton Fire Department is hosting its first Disaster Preparedness Training of the year this Saturday at the Pleasanton Senior Center from 10 a.m. to noon.

With a focus on individual and family readiness, the event will include topics such as utility shutoff, family planning, disaster kits and more. The training is free but space is limited. Register at www.pleasantonfun.com, using code No. 18823.

A similar training will also take place on April 11, and city officials have scheduled daylong disaster readiness classes on April 4 (in English) and May 2 (in Spanish).

Inspired by their success last time, the Equipment for Everyone Club at Amador Valley High School is hosting another sports gear collection drive this Sunday (Feb. 23).

New or lightly used athletic equipment will be collected in the Santa Rita Road parking lot from noon to 3 p.m., then given to students around the Bay Area who are less fortunate or have special needs.

In November, event organizers Brent Friedman and Monty Sage collected around 2,000 unused sports items for the Boys and Girls Clubs of America, including new and gently used gloves, bats and 800 softballs.

The boys said they are "expecting an even larger turnout than last time" since they've partnered with the Pleasanton Challenger Baseball League, which gives special needs children the chance to play ball, to receive a portion of the donations this time.

The remainder of donated goods will be given to the local Boys and Girls Club. For more information, e-mail equipmentforeveryone@gmail.com.

Caltrans started performing tree pruning overnight along Highway 84 between Sunol and Fremont (Pleasanton Sunol Road to Mission Boulevard), a project that will continue through March 8.

The city of Dublin is celebrating the grand opening of its new police headquarters with a ribbon-cutting ceremony this Saturday, two years after construction on the complex started.

Located at 6361 Clark Ave., the new Public Safety Complex, as it is officially known, houses essential functions like Dublin Police Services administration and an expanded Emergency Operations Center that is much larger than the former one at Dublin Civic Center.

There is also a briefing and training room and administrative offices for Alameda County Fire Department personnel onsite as part of the $15 million project.

The festivities begin at 11 a.m. There is no admission to attend the event, which also includes facility tours and a free barbecue lunch provided by the Dublin Lions Club.

After the Weekly went to press last week with the print version of the story "Studying potable reuse," Pleasanton city officials confirmed that the follow-up discussion on the regional studies would occur at one of the City Council's March meetings -- not this past Tuesday, as initially indicated.

The city is contemplating signing on to a Tri-Valley task order (with a local pricetag up to $250,000) to explore the possibility of supplementing the local water supply with recycled water treated for drinking purposes, better known as potable reuse water.

The hearing date is not yet confirmed. The council would meet March 3 (Election Night) or March 17.

The Tri-Valley Citizens' Climate Education program is holding its monthly meeting next Thursday (Feb. 27) from 6:30-8:30 p.m. at the Livermore Library at 1188 S. Livermore Ave.

The featured presentation, entitled "Pathways to Zero: How California Can Have a Carbon Neutral Economy," will be delivered by speaker Roger Aines, Ph.D., chief scientist for the energy program at Lawrence Livermore National Laboratory.

The event will also include discussions and announcements on EarthWeek Livermore 2020, reports from local climate groups, an update on the city's Climate Action Plan, voter registration and the upcoming U.S. census. To learn more, visit trivalleycce.org.

The Pleasanton Public Library is set to host the Veterans Affairs (VA) Palo Alto Mobile Medical Outreach Team and the Alameda County veterans service officer next Thursday (Feb. 27) to facilitate free examinations, consultations and referrals for veterans, as well as provide other information about VA resources.

Veterans uncertain of their benefits eligibility are encouraged to visit as requirements have changed, and VA health care may complement current medical coverage. Veterans should bring military discharge papers (Form DD-214) and a list of current medications.

The Alameda County Fair recently earned top awards from the Western Fairs Association and the International Association of Fairs and Expositions for innovation and excellence in competitive exhibits, agricultural programs and marketing for 2019.

In all, the Pleasanton-based fair took home 34 WFA awards in its division, including 17 first-place honors. IAFE recognized the fair with seven international awards.

The Impact of COVID-19 on Our High School Juniors and Seniors
By Elizabeth LaScala | 0 comments | 2,602 views

The first few seconds after awakening; before I remember the virus
By Chandrama Anderson | 0 comments | 2,002 views