Improv troupes to compete in Pleasanton 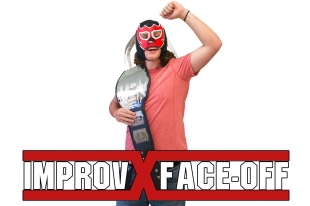 Wrestling is the theme of this year's improv "Face-Off 2020" competition. (Contributed photo)

"Face-Off 2020" will pit local improv teams against each other next week in a series of pro-wrestling themed "bouts" with WWE-inspired scenes at the Firehouse Arts Center.

Hosted by Creatures of Impulse, Pleasanton's teen improv troupe, the competition will include a series of shows with games and high-jinx, interacting with the audience. A champion improv team will emerge, and audience members also will have the chance to win prizes.

The show schedule is as follows:

* 7:30 p.m. Thursday (Feb. 20): Mission Improvable from Cal High in San Ramon. This team was the first to face Creatures of Impulse in the inaugural "Face-Off" in 2008, held at the Veterans Memorial Building.

* 7:30 p.m. next Saturday (Feb. 22); Las Positas College Improv Team, which was launched by Jeff Zavattero, who is directing this year's Face-Off.

"'Face-Off' is Jeff's favorite show of the whole COI season so I'm happy to take a back seat on this one," Duncanson said.

A special preview performance will be held at 7:30 p.m. on Wednesday with "Mr. Amador" from Amador Valley High School; tickets are $2, cash only.

Since its founding 12 seasons ago, Creatures of Impulse has represented California at the Teen Comedy Festival in Chicago four times, and performed in San Francisco with the professional improv troupe, Un-Scripted Theater Company, in Union Square.

This is such a great show! I look forward to it every year.

The Impact of COVID-19 on Our High School Juniors and Seniors
By Elizabeth LaScala | 0 comments | 2,566 views

The first few seconds after awakening; before I remember the virus
By Chandrama Anderson | 0 comments | 1,935 views